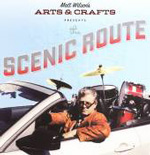 Drummer Matt Wilson's Arts and Crafts ensemble has followed a somewhat more mainstream path than some of his previous efforts. With each release, Wilson has been slowly expanding the concept of this unconventional quartet with an eclectic and exploratory ear. Arts & Crafts' third album on Palmetto Records, The Scenic Route, is as varied and rewarding as either of the group's previous efforts.

Sideman gigs and collaborations with such luminaries as Charlie Haden, Dewey Redman and Lee Konitz, as well as peers like Ben Allison, Fred Hess and Tom Varner have demonstrated Wilson's aptitude playing everything from standards to free improvisations. This versatility enables the ensemble to vacillate freely between both worlds.

Despite the varied palette, this esoteric mix avoids pedestrian eclecticism with careful sequencing, allowing the tunes to flow seamlessly. Wilson even manages to blend vintage Donald Ayler with a Beatles tune on the closing medley, "Our Prayer/Give Peace a Chance," summing up the group's multifarious capabilities. Opening with ethereal free musings on an Ayler-penned gospel/folk-theme, colored by sputtering accordion, winsome clarinet, buzzing trumpet and skittering percussion, they segue into a chanting vocal refrain, blending wearily knowing protest music with timeless forms, making a statement for the ages.

Visit Matt Wilson on the web.