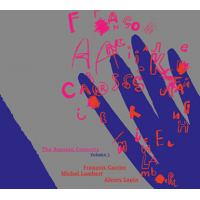 Back in 2011, this trio released an excellent trilogy of albums which documented a December 2010 tour of Russia by Canadian alto saxophonist Francois Carrier and his long-time drummer Michel Lambert during which they played with Russian pianist Alexey Lapin in Moscow and St. Petersburg. Now, The Russian Concerts Volume 1 again documents the three together in Moscow, but this is not a fourth record of the 2010 tour, instead being the first (of several, judging by its title) from April 2013. The music come from two consecutive days—three pieces recorded on April 27th at DOM Cultural Center and one piece from 28th at Nikitskaya Jewish Cultural Center, over seventy minutes of music in total. (Incidentally, the YouTube clip below shows them on April 29th in St. Petersburg... there are plenty of fine clips of this trio on the site.)

The music here displays the same strengths that made the 2010 trilogy so extraordinary. As before, all of those strengths are due to the three players, individually or collectively. The album carries a phrase that typifies Carrier's thoughts on music making: "Music comes out of silence." In practice, that means that everything here is improvised but, as before with this trio, it all flows so smoothly that it would be impossible to guess that they were not working from written themes. The key to that is Carrier's saxophone playing and his ability to reel out a never-ending stream of coherent melodic phrases which he then uses as source material to explore at length. He constantly invests his music with variety and freshness by subtle shifts of tone and attack. Carrier is adept at producing climactic tumults of music—as he shows on the half-hour-long "DOM 1" —but he builds up to them logically, taking the listener with him every step of the way, with no sudden or clunky gear changes; thankfully, he shows no interest in going from nought to sixty in seconds.

While Carrier is the focus for much of the time, this is no one-man-band, as Lambert and Lapin are just as vital to the music's drive and momentum as he is, both as accompanists and soloists in their own right. Together, the three of them play as a coherent unit who sound as tight as one that is gigging together constantly. Impressive stuff. After the model of the 2011 releases, we must hope and expect that this tour will provide plenty more music of this quality to follow, an edifying prospect...