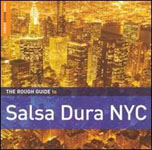 The Latin melting pot that was New York in the 1960s and 1970s gave rise to salsa dura, or hard salsa. The neighborhoods of Brooklyn, Queens and the South Bronx were teeming with immigrants from Cuba, Puerto Rico and South America, who brought together their instruments, fused their rhythms and voiced their social concerns in a hard-driving dance music which would soon come to sweep the world.

The 1980s and 1990s saw a decline in the popularity of salsa dura as the younger Latin generation, more accustomed to American mores than either their parents or grandparents, felt more in tune with rock music, hip-hop and techno. A more radio-friendly salsa emerged —salsa romantica, which emphasized melody over rhythm, and musicians of the dura school of salsa found record deals hard to come by.

The last decade however, has seen something of a revival in the fortunes of salsa dura, and this satisfying compilation from The Rough Guide brings together a cross-section of the artists who are once again filling the dance floors of New York City with their infectious sounds.

Veteran pianist Eddie Palmieri kicks things off in grand style on "Lo Que Traigo es Sabroso. His insistent piano riffing is complimented by timbales, bongo and conga, leading into the montuno, or solo section. Here, the solo is a lovely, piercing flute, and the highly-charged conjunto recalls the best of the Fania Allstars. Soloing is a feature of salsa dura and improvisations by flute, trumpet, piano, guitar and percussion pepper the songs.

Other seasoned musicians shine. Wayne Gorbea employs a highly effective coro (call and response) throughout "Estamos en Salsa, with the trumpet taking centre stage. Jimmy Delgado contributes "Naci Rumbero, where again trumpets blare over a punchy brass chorus and the cowbell never lets up. This is music guaranteed to raise a sweat.

An important aspect of salsa dura in the 1970s was the lyrical content which addressed issues such as race, poverty and identity. Here, Los Soneros del Barrio revives an old classic, "Babaila, which tells the story of a young boy, a victim of trafficking. It may seem strange to be dancing sensually while Babaila cries, "I don't want to die in chains! but this is salsa dura after all. Elsewhere, Chino Nunez defends diversity and non-violence and Jimmy Bosch lambastes the major record labels and radio stations for ignoring salsa dura.

With commercial radio seemingly ever blander and major record labels increasingly conservative, the clubs and dance floors are where this music lives and breathes. The Rough Guide to Salsa Dura NYC is a very fine compilation which will satisfy salsa dura aficionados and hopefully whet the appetite of newcomer to this exciting genre of rootsy dance music.