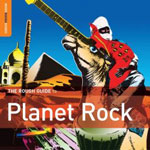 Here's an interesting first: after a long string of successful compilations in the Rough Guide world music series, one that actually falls flat. The subject matter could not be broader—there is probably no single international genre as enormous and diverse as rock. So what went wrong? Johannes Heretsch, the veteran DJ and Berlin radio host who put this collection together, made some borderline picks.

It must be said that these sixteen tracks cover a vast range of geographic and musical territory. They span a total of four continents, touch down in eighteen countries and speak almost as many languages. In addition to the local styles each participant brings to the mix, the actual rock aspect morphs from light to heavy, organic to artificial, relaxed to aggressive.

The energetic groove of the opening Dengue Fever track is engaging enough until it's sunk by Ch'hom Nimol's vacuous bubblegum-pop vocals in Khmer. Reunion Island's Yela twists pseudo-Afrobeat into soft loungecore taffy; the Transsylvanians manufacture a groove out of high-stepping plastic beats and melodic hooks. Aren't they trying a little too hard to please? Are these really the top rockers of the global era? More importantly, is popular music really doomed to feed the machine? Heretsch's liner notes, while very informative, are loaded with hype.

The best stuff on the record is ironically least qualified as rock. The Saharan nomads known as Tinariwen crank out a molten hunk of raw, driving desert blues. Konono No. 1, a Congolese likembe (thumb piano) band, has adapted homemade amplification systems that are at least as interesting as the music itself. But no, that's actually plugged-in trance music—it has no backbeat. And the Hip Hop Hoodioos' Latin-Jewish hip-hop is exactly that, not rock.

Strip this collection down to size and it would actually pack more of a punch with half as many tracks. Your mileage may vary, of course, depending on your tastes. The trippiest global rock intersection on the set is a surreal version of Iron Butterfly's "In A Gadda Da Vida," delivered most righteously in the sub-subterranean range by Tuvan throat singer Albert Kuvezin, who asks ponderously in accented English, "Honey, don't you know what I mean?"