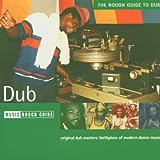 Jamaica's greatest musical ambassador may have been the late Bob Marley, whose birthday is a national holiday and who continues to sell records in the zillions, god bless his soul (and his estate's massive fortune). The lilting rhythms of reggae have infiltrated popular music around the globe in ways that even Marley could not have imagined, opening ears to other Jamaican sounds like ska, rocksteady, and dancehall. But the island's most lasting legacy, borne out through its pervasive contemporary influence on hip-hop and electronica, among other styles, is dub.

The 1970s were a time of loud experimentation in Jamaica, with an insane flurry of local activity centering around sound systems erected to move sweaty bodies all night long. The studios tasked with supplying the wax for these events came up with the idea of instrumental "versions" without the usual vocals on top, originally supplied as B sides on the actual vinyl. But with the creative influence of mixmasters like King Tubby and Lee Scratch Perry, the approach took on a new name and a distinctively trippy, effected sound. Their early efforts have inspired subsequent generations, including present-day masters like Adrian Sherwood and Bill Laswell.

The Rough Guide to Dub wisely does not attempt to cover the worldwide aftermath of the '70s dub revolution. Instead, it focuses on key early activity, with specific attention to King Tubby and the musicians in his revolving circle. These short sides, all but one licensed from Blood & Fire, include versions of "Satta Massa Gana," "Swing & Dine," "Away with the Bad," "Money is the Root of All Evil," and more. With key contributions from Prince Jammy, Vivian "Yabba You" Jackson, "Family Man" Barrett, Augustus Pablo, Bunny "Striker" Lee, Horace Andy, Earl "Chinna" Smith, Sly Dunbar, and other heroes of the era, there's a lot of star power on hand. The liner notes do a pretty good job of setting straight who's who in the big picture, though it's impossible to always get the bottom-line details.

These deceptively simple trance-like rhythms, reverberating effects, tweaked mixes, and minimalist melodies have been revisited time and time again over the years. Most of the fallout, quite frankly, is crap—assembled by producers too lazy to stretch out into dub's expanded mindspace. Reminders like this compilation emphasize the creative spirit that surrounded dub's genesis. The material has aged surprisingly well given the market forces that guided its evolution.

A message for today's hipsters: check out King Tubby's instruction manual before you get too comfortable behind the console.