Pauline Oliveros: The Roots of the Moment 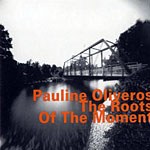 While Pauline Oliveros' output has its high and low marks, the composer, accordionist and organizer is an undeniable force in new music. For fifty years she has pursued sonic experiments, and as the founder of the Deep Listening Institute, she has supported many other sound innovators.

Sadly, it's sometimes easier to respect her from afar than to closely follow her work. Her choices in collaborators can get in the way, and they often seem to be made out social or political sympathies as much as musical ones. But there are gems within her catalogue, such as Troglodyte's Delight (1990) with her Deep Listening Band or the early tape experiments on Alien Bog and Beautiful Soop (1997). Her 1988 release The Roots of the Moment, just reissued by Hatology, is among those essentials.

Essentially a solo recording, Oliveros and her accordion are found here within an "electronic environment created by Peter Ward. The electronic element isn't explained in the liner notes (written by her neighbor, saxophonist Joe McPhee, with whom she's collaborated), and its presence seems subtle on the recording. Reverb and delay may be present at times, but it might be best just to assume they're there.

Either way, Oliveros creates a fascinating, elongated suite (six tracks clocking in at just under an hour) with her instrument. Her "just intonation accordion allows worlds of small intervals, allowing odd intervals and tonal juxtapositions that are complex without dissonance. The pace varies from very slow to quiet trots, but the overall effect is of being submerged into the accordion. They may polka when they're awake, but this is the sleeping squeezebox's sound.