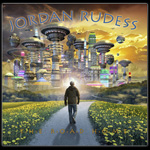 Genesis...Yes...Gentle Giant... King Crimson... Emerson, Lake & Palmer...all significant contributors to the stylistic groundswell of progressive rock nearly forty years ago. Morphing beyond recognition, ceasing to exist or resting on their laurels, each has seen a resurgence of interest in recent years, as the internet makes it possible for fans around the world to come together in ways previously not possible.

They've also had a significant impact on contemporary groups like Dream Theater. DT's keyboardist Jordan Rudess—also a session ace and leader—pays tribute to these seminal groups on The Road Home. Tackling some personal favorites including Genesis' "Dance on a Volcano," Yes' "Sound Chaser," Gentle Giant's "Just the Same" and ELP's "Tarkus," it's hard not to ask: do we really need these contemporary retakes?

Superficially, perhaps not. But digging deeper into Rudess' undeniably loving homage reveals not only a talented player/interpreter, but someone who understands the fine line between reverence and mimicry. The majority of the material begins in close approximation, but Rudess' voice gradually emerges, as do a wealth of modern textures. Consequently, this is not just a compelling trip down memory lane for fans of the originals, but an opportunity for younger fans to hear where a group like Dream Theater came from, and generate interest in the groups that were instrumental in shaping contemporary progressive rock.

Rudess may start close to the originals' complex arrangements but ultimately deviates, in particular creating greater solo opportunities for himself and a host of guest guitarists including Ozric Tentacles' Ed Wynne, who turns in impressive solos on the jazz-centric "Sound Chaser" and complex counterpoint of "Just the Same." Rudess' guest vocalists have a greater challenge, especially when the original performances are so definitive, and they don't always work. Metal group namesake Kip Winger straddles the same line as Rudess to great effect on "Dance on a Volcano," but goes a tad over-the-top on "Just the Same." It may be sacrilege to suggest that some aspects of these reworks actually improve on the originals, but it's also hard to deny drummer Rod Morgenstein doing something Carl Palmer never managed on the epic, twenty-plus minute "Tarkus": play orchestrally and keep good time.

Rudess also adds his own idiosyncratic compositional passages, like the fusion-centric 7/4 expansion of "Aquatarkus." As key as Rudess' choice of collaborators is, this is really his show, with an array of keyboards both emulating the sounds of the originals and adding new ones to the mix. He's as virtuosic as any of his sources, something made clear on the solo piano "JR Piano and on his own, very knotty "Piece of the Pi," which would undoubtedly make Keith Emerson and Rick Wakeman stand up and take notice.

It's hard for those who were around, back in the day, to think of this material as repertory. Still, with The Road Home Rudess proves that it's possible to take even the most tightly structured and hallowed classics and open them up for more contemporary reimagining.

Dance on a Volcano; Sound Chaser; Just the Same; JR Piano Medley: Soon, Supper's Ready, I Talk to the Wind, And You and I; Piece of the Pi; Tarkus: Eruption, Stones of Years, Iconoclast, Mass, Battlefield, Aquatarkus.