The String Trio of New York: The River of Orion: 30 Years Running 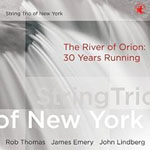 The String Trio of New York (STNY) started in 1977 with John Lindberg (bass), James Emery (guitar) and Billy Bang (violin). Lindberg and Emery have been constant while there have been a number of violinists since Bang left in 1986: Charles Burnham, Regina Carter and Diane Monroe. Now with violinist Rob Thomas, they may have their most unified musical vision. Though he contributes no compositions here, his playing is strong on every level and, because of the register of his instrument, he easily fills the role of leader in this leaderless, cooperative band.

This recording contains two suites, one composed by Emery, the other by Lindberg. Emery's suite displays the detailed composition work for which he should be better known. The theme, "The River of Orion (Theme)," actually appears halfway through the suite. It's a gentle, lyrical bossa nova that puts Thomas' rich tone and melodic playing to the fore, while also demonstrating Emery's lush harmonies and Lindberg's deep understanding of groove. Though the piece isn't a "theme and variations" per se, Emery explains in the liners that the source of inspiration is the star constellation. No need for explanation when the melodies and harmonies are so strong and even though it could be argued that STNY came from the avant-garde (and still do have modernist leanings), this band breathes strong life into the tradition and really delivers what jazz proposes: virtuosity, musical surprises with joy and thoughtful control of material. Movement 7, "Stellar Coronae," is a cross between jazz ballad and classical prelude. The instruments' gorgeous tones are even more evident at this slower tempo. Emery's broad compositional skills allow for all three players to dart about into the melodic foreground. Movement 9, "East of Mintaka" demonstrates why Thomas is probably the best violinist for this trio; his tricky unison lines with Emery are not only accurate, but fly by with grace and swing. Emery's solo is one of his best on the CD.

Lindberg's suite, "Journey Platz," is shorter in duration but no less ambitious. On the surface, it's more abstract, yet it sweats more. The beginning of "Part Four" grabs attention with all instruments strumming and bowing as fast and as loud as possible, moving just as suddenly to a soft pedal tone in the bass and then quickly off in other sonic directions. As Lindberg states: "Its [Journey Platz] core goal is to elicit performances from the three virtuosos, both individually and collectively that transcend what I could notate or otherwise construct in more traditional terms." "Part Five" starts off as if the instructions might include "multi-tempo, fragmented jazz." The bass walks at a moderate tempo, the guitar plays in the spaces left over and the violin floats above the plucked strings. The piece (and CD) ends with mysterious sounds, maybe the raspy sound of Thomas' bowed violin approximating the sound of a door closing. Thomas gets the final word in the liners, thanking a restaurant in Milano (where this CD was recorded) "for five nights of culinary delight and hospitality." These guys not only know how to make great music, they know how to live.