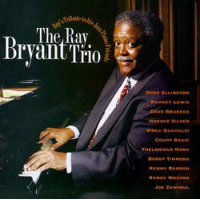 Though I have several recordings on which Ray Bryant appears, I had been unaware of who he is and where he fits in the musical scheme of things. Recently, while listening to several demo CDs, I came across his newest recording, The Ray Bryant Trio: Ray?s Tribute to his Piano Friends, and fell in love with it. This is a recording that is not unlike Oscar Peterson?s A Tribute to My Friends (Pablo PACD-2310-902-2, 1987) except that Bryant?s tribute is to other Jazz pianists.

The Usual Suspects. Bryant?s choice of pianists to honor is no surprise, as are the compositions with which he pays tribute. Not only is the standard fare present, but many are songs already familiar to Bryant?s repertoire. The surprise comes with the arrangements and performances. Surprise is really too mild a word. Bryant?s treatment of these standard?s standards is revelatory. I have not been so delighted with a piano trio treatment of standards since I first heard Gene Harris? performances with his own trio and as part of the Ray Brown Trio.

That Old Time Religion. I have always favored Gene Harris? big, churchy, bluesey, orchestral sound and gospel influenced style. I came fully to that opinion when Harris emerged as the result of a lot of listening. I had spent a good bit of time and money looking for a pianist with a similar philosophy and sensibility as the late Count Basie without his economy of notes. When I first heard Harris? recording, Tribute to Count Basie (Concord CCD-4337, 1988), I knew I had found that sound I was looking for. Since discovering Harris, I had hoped that I could find a similar style in other piano players. I met with limited success (though I did scare up some fine music while looking). Bobby Timmons was very good, but uneven (and regretfully no longer with us). Monty Alexander is talented but too tropical. Benny Green has enormous technique but is too ornate (Oscar Peterson, also). Finally, I (gratefully) found that Ray Bryant possessed the sound, that sound, and played it with an impressive depth and breadth. He takes the standards included in this collection, and with loving care and precision, shines them through the prism of his soulful, gospel approach to product the best trio recording I have heard in some time.

The Canon. The disc opens with "C Jam Blues." The piece begins with the straight Ellington introduction with Bryant?s playing so big the listener can almost hear the horn section enter. About half way through, the drummer moves from the high hat to the ride cymbal and Bryant starts to swing so hard the listener is in danger of a nosebleed. The performance ends as confidently and proudly as it started.

The Heart of the Matter. Three of the remaining songs exist as absolute proof of the sanctity of improvisation and arranging in Jazz. Under Bryant?s skillful hand "?Round Midnight" exercises for nine glorious minutes, passing from a straight ballad head into a calypso rainbow, compelled forth by Bryant?s smart, two-fisted playing. Absolutely thrilling. Bobby Timmons? "Moanin?" is made even more Pentecostal than the composer?s original trio version on This Here is Bobby Timmons. Bryant?s left hand guides the choir while his right punctuates his preaching with "Amens" full of conviction. The final standout is Bryant?s performance of Weather Report?s "Birdland." It was this piece that sold the disc to me. Never having been a huge fan of fusion, my first hearing of Bryant?s "Birdland" forced me to replace my vinyl copy of Heavy Weather with CD and to listen to what Joe Zawinul and Jaco Pastorius were really thinking with a better understanding. Bryant?s trio reduction is precise and brilliant, not unlike Liszt?s piano reductions of the Beethoven Symphonies. "Birdland" illustrates the profound adaptability of jazz to different performance styles.

The Atomic Factor. Bryant?s cohorts, Ray Drummond on Bass and Winard Harper on drums mesh effectively with the leader to produce a swinging cohesive unit. This is no better illustrated than on the last three songs discussed. This trio is less a rhythm section and more an entire orchestra. Tasteful is not how I would describe this trio?s playing; necessary or essential might be more appropriate. This trio treated this music with the respect it deserves while transforming it in such a way that the listener can come to a different understanding of what jazz is all about.

C Jam Blues; The "In" Crowd; The Duke; Doodlin'; Cast Your Fate to the Wind; Cute; 'Round Midnight; Moanin'; Sunshower; Hi-fly; Birdland.