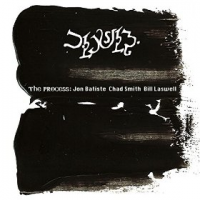 If anybody saw this coming, they must to be clairvoyant. The Process brings together drummer Chad Smith, the hard-hitting, groove-making force that drives the Red Hot Chili Peppers, pianist Jon Batiste, the oft-cheery personality who bridges the NOLA-New York divide with his crowd-pleasing, accessible brand of jazz, and bassist-producer Bill Laswell, a prolific, genre-blind force with a mile-long list of credits who's straddled and erased the divide between pan-African styles, dub, funk, jazz, various strains of rock, electronica, and avant-garde music.

All three of those men have strong and distinct personalities, and each brings something important to the table, but Laswell is the key ingredient here. He often finds himself at the center of less-than-likely collaborations like this, and everything that bears his production stamp manages to make the unlikely seem perfectly natural. He has a way of creating artful canvases that pulsate, throb, and rock, not with a cold chill or overly mechanical vibe, but with an air of humanness. Batiste, more than anybody else, moves beyond expectations, often painting with alien sounds and drawing abstract lines. Reflective purity shines through when he's alone with his thoughts ("B1"), but his experimental side wins out when everybody's at work. Smith, while moving beyond his comfort zone a bit, is basically still in hammer mode, driving the music with controlled aggression. His tribal tom-and-snare grooves merge well with Laswell's locked-in bass lines throughout.

While The Process was created in the studio, with nothing written in advance, it wasn't conceived and created in a single burst of inspiration. In fact, there was quite an evolutionary process at play here. Laswell notes that "the original idea was to film unfamiliar musicians playing together in a room with no preconceived direction." As time went on, plans changed, and the idea of making an album seemed to make more sense. So, all three musicians, along with guests like multi-reedist Peter Apfelbaum, Tunde Adebimpe from TV on the Radio, and Killah Priest from Wu-Tang Clan, got together in the studio and jumped right in. The resultant tracks, with rap ("Turn On The Light"), Toshinori Kondo's processed trumpet ("Haunted"), Dominic James' guitar, and other surprises, speak to different styles yet resides in a singular Laswell-ian zone.

Process is important to the story of this album, but outcome ultimately trumps process when it comes to music. Knowing how an album is made, and the complete story behind it, certainly contributes to full-picture understanding of a work, but the real question is this: can the music stand apart from its story? In this case, the answer is "yes." The music presented on The Process tells its own story in rhythmically vibrant fashion.

B1; Drop Away; Timeline; Haunted; B2; Turn On The Light/Ascent; Black Arc; Spiral; B3; Time Falls; The Drift.