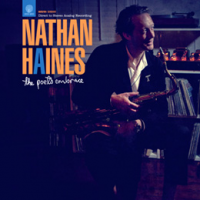 The spiritual jazz path is not noted for being an easy option, but over the years it's proved to be one of the most rewarding choices, for both musician and listener. Much of the music on The Poet's Embrace suggests that tenor saxophonist Nathan Haines has traveled at least some way along that path in creating this album and the results of that journey are impressive.

In a career that began in the '80s as a teenager in his native New Zealand, Haines has encompassed jazz, soul, dance and house music, working with a diverse array of collaborators including arranger and pianist Alan Broadbent, singer and writer Damon Albarn and jazz-funksters Jamiroquai. There have been seven previous studio albums under his own name as well.

The Poet's Embrace represents something of a departure from Haines' previous work: his first album recorded "live," straight to tape using analog equipment and without overdubs. The resultant sound, courtesy of producer Mike Patto, is warm and rich, resonant of late-50s and early-60s period vinyl records from labels such as Blue Note and Impulse!. The album was recorded in New Zealand in December 2011 and features fine support from Kevin Field on piano (he also composed "Offering") and the bass/drums partnership of Thomas Botting and Alain Koetsier.

The beautiful "Realisation," credtied to Haines, Field and Patto, opens proceedings with Haines' tenor at its silkiest and most ethereal. Its relaxed mood continues across most of the following tunes—even the sprightly, up-tempo "Ancestral Dance" sounds effortlessly groovy. The album's sole cover tune, Roy Brooks ' "Eboness," is characterised by the same spacious, laid back, feel as Yusef Lateef's version on The Diverse Yusef Lateef (Atlantic,1970). Botting's hypnotic bass line controls the tempo as Haines plays the seductive melody: in fact, it's a fine performance all round.

It's not clear which particular poet's embrace is the inspiration for The Poet's Embrace. It's a shame, because such inspiration deserves at least some credit for this album full of exceptionally lyrical and beguiling music.