Home » Jazz Articles » Benny Green: The Place To Be

Benny Green: The Place To Be

By William Grim
August 1, 2002
Sign in to view read count 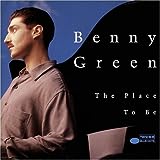 Benny Green is one of the most gifted jazz pianists around, and The Place To Be shows off his abilities in a variety of settings. The album starts off with a big band arrangement of “Nice Pants” which at times sounds like it’s based on the changes of “Critic’s Choice,” a tune that was a staple of the Buddy Rich book from the 1960s. It has a time medium tempo swing to it and features an excellent bass solo by Christian McBride in addition to Green’s omnipresent powerhouse piano. The big band groove is also found in “I Want to Talk About You,” partly based upon “How High the Moon,” and “I Felt That,” the latter tune with a Thelonious Monk-inspired melody.

Green’s trio work is outstanding and nicely varied. “Playmate” is a real tour de force and features blazingly fast single-line and octave runs a la Oscar Peterson. In the middle of the song there is a lot of nice stride piano. Green and company change pace with “Pensativa,” a pleasant bossa nova that is indebted to Antonio Carlos Jobim’s “Wave” and also to “You Came Along from Out of Nowhere.” “One of Another Kind” is an interesting composition and almost sounds like an up-tempo version of Miles Davis’ “So What?”

Green displays a similar eclecticism with his solo piano pieces. They range from a swinging version of Steve Allen's “Gravy Waltz” to the highly contrapuntal “The Place To Be” to a very sensitive and understated performance of the beautiful ballad “The Folks Who Live on the Hill.” The last song is one of the most poignant compositions in the Great American Songbook, yet it is not performed that often, the most recording being Diana Krall’s.

Benny Green is a consummate jazz pianist. He’s mastered all the past styles from Kansas City stride to Bill Evans to bebop and beyond and he’s taking the music to heights unknown. The Place To Be is just that, the place where everyone who appreciates great jazz will want to be.

Nice Pants; Playmate; I Want to Talk About You; Place to Be; I Felt That; Pensativa; One of Another Kind; Which Came First?; Noreen's Nocturne; Concertina; Gravy Waltz; Folks Who Live on the Hill