The Treehouse Project: The Picture Show 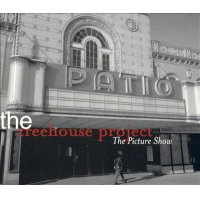 Drummer Michael Reed's Treehouse Project takes a decidedly idiosyncratic turn on The Picture Show. The tunes on this 3-CD set reflect a conscious marriage of image and music (or, in the case of the last disc, words and music). While the idea of tying music to art is not a novel one, this set twists the concept: each tune on The Picture Show has a companion photograph. The photos (mostly of the lo-fi home vintage) show people at various ages and in various settings, each hinting at a story. The Treehouse Project takes off from there. For example, on "The Slow Learners Club" (a black and white photo showing a group of bored-looking young people) moves through lumbering swing and bluesy passages, building off a simple theme and aiming toward clear resolution. The combination works. On "Big Top" (photo featuring a grade schooler in a shiny clown outfit) the group hits the circus theme big time, complete with a sing-song melody on clarinet and trumpet. Needless to say, each of these pieces expands into extended improvisation, but one has the sense at all times that the group has convened to convey a coherent message reflecting the image at hand.

The outright success of this project owes itself to three features: first, a collection of clever and thought-provoking images (and words); second, fluent exposition through highly varied compositions; and third, good old-fashioned group coherence and interplay. One gets the sense from The Picture Show that while structure may dictate the melody and harmonic structure, each player is free to add his or her own personality to the music. For the leader, Michael Reed, that manifests itself through understated support—percolating energy during quieter moments, fast-driving hits when the tempo picks up. For guitarist Colin Bunn, that translates into crystalline melodies, angular & twisted solos, and an ear for the unexpected. Saxophonist Jonathan Doyle has regular duty at the helm, and he uses that position to advantage exploring a wide range of styles from swing to blues to the uncategorizable beyond.

A few more high points. "The Party" (grainy '70s image of a family gathering) digs deep into a sauntering groove, high-spirited and celebratory. One can almost hear a kazoo solo midway through. "Never One To Complain" (a family gathered around a vintage Audi at the beach) waxes lyrical, bringing Ken Champion's pedal steel to the forefront for a reverberant, melancholy stroll. The last disc (Last... Words) takes on tunes by the likes of Cream, Ray Charles, and Ron Sexsmith, delivering alternate takes without words that owe their spirit to the original but are otherwise completely reworked. "You Don't Know Me" (Ray Charles) comes across as a rueful lament, slow-paced and quiet. The very brief "Just a Song Before I Go" (Crosby Stills & Nash) adopts open country harmonies and a reverberant soft tone. If you look at the words behind this music, the correspondence remains as clear as it is on the other discs where tunes are matched to image.

For a project this ambitious, The Picture Show is remarkably successful. This set spans an extremely broad range of styles, traveling through sound and image with a fluidity that is almost surreal. Sure, certain tunes might seem overly simplistic or stylized, but that's the band's prerogative in response to the subject material. The Treehouse Project has really evolved and dramatically expanded its sound since its 1999 eponymous debut. It will be exciting to hear what the group tackles next.

Prologue: Cameo Frame: Tic-Toc; The Party; Slow Boat; A Little Pick-Me-Up; Tic-Toc Reprise; Never One To Complain; A Few Good Men; Graduation Day. The Picture Show: Places Everyone; Hold It... Hold It!; The Ugliest Girl Alive; Time Out; Corsages; The Big Top; Intermission (Music Provided by the Half Time Trio); Curtain; The Cocktail Party Effect; The Slow Learners Club; A Perfect Fit; Dance Lessons; A Place For Us. Epilogue: Last... Words: Last Words; Politician; Just A Little Loving; You Don't Know Me; Child Star; The Dutch Boy; Just a Song Before I Go.