By Michael McCaw
September 21, 2005
Sign in to view read count 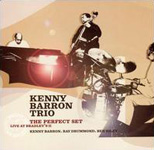 This music is immaculate. From the onset of "You Don't Know What Love Is and the suspended feel pianist Kenny Barron generates in his unaccompanied opening statement, entrancing listeners with his eventual development of the chorus, you know you are hearing a modern master of the piano. Bassist Ray Drummond and drummer Ben Riley are not too shabby either. Performing and recording off and on since 1984, this trio creates music that is pure, honest, and forthright. Not to mention swinging, invigorating, and full of excitement and tenderness.

As Drummond and Riley join Barron a minute and a half into the fifteen-minute opener, they build momentum quickly, with Riley providing subtle yet driving support with brushwork that is recorded beautifully. Drummond walks up and down and provides a low-end counterpoint for Barron's musings, and near the end he trades phrases with Riley that demonstrate their own simpatico. The beauty of Live At Bradley's II, just like the first volume, is that while the material is worked at length and sometimes consists of standards that have been played and recorded countless times, each performance is immediate and original. As a listener, you don't realize you are eight minutes in—you are amazed at the performance itself.

Since Kenny Barron's first recording in 1974, he has continually refined his approach to the piano. Now as precise and elegant as ever, Barron plays and projects a sense of confidence and warmth that only a handful of today's musicians can communicate. And although he has long established his own singular voice, here Barron liberally applies his knowledge and love of Thelonious Monk that he has integrated over the years. From Monk's own "Well you Needn't to his retooling of "Hackensack, entitled "The Only One, Barron shows off his admiration with flawless intonation and grace, never sounding like a copy, but a pianist who is indebted to an icon.

His solo feature, "Shuffle Boil, seems to call back to James P. Johnson in a modern context, with some Monk thrown in as well. With both hands interlocking and separating into two different rhythms which sometimes form their own call and response figures, Barron demonstrates his vast abilities without sounding overly gregarious or showy.

It's a shame that the club which produced this 1996 recording is now gone. Long a haven for intimacy, with a Baldwin piano bequeathed by Paul Desmond in his will, Bradley's required a quiet policy from patrons that would serve well in clubs everywhere. Nonetheless, here is another snapshot of another inspired performance. Dubbed "the perfect set by engineer Jim Anderson, who has been recording jazz for over 25 years, this hour-long midnight set is well worth the nearly decade-long wait for its release. Hopefully the 2 am set Barron asks his listeners to stick around for after an inspired rendition of "Well You Needn't will be heard by the general public in a more timely manner.

Visit Kenny Barron on the web.