BY DOUG COLLETTE
February 6, 2011
Sign in to view read count 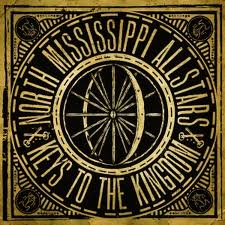 Following a hiatus of sorts for The North Mississippi Allstars, during which time guitarist Luther Dickinson worked with The Black Crowes while drummer sibling Cody fronted his own band, Hill Country Revue, the group's reformation has fueled a fire within the music of Keys to the Kingdom.

The music begins to flow in a rush of emotion, right from the beginning of "This A'Way," and "Jumpercable Blues," though a bit tongue-in-cheek, is a comparable torrent of feeling. "Ain't None of Mine" alternates a gigantic rhythmic push with a gossamer-light touch, while "New Orleans Walkin' Dead" is a psycho-sexual exorcism married to twisting turning guitar, bass and drums.

The sound of the trio is clean but unpolished on Keys to the Kingdom, recorded in its entirety at the Dickinson family's Zebra Ranch studio. The unadorned mix thus allows Luther Dickinson's guitar, his brother Cody's drums and Chris Chew's bass to resonate, and then hang in the air. As a result, the band's voices half-sung and half-hollered on "How I Wish My Train Would Come," act as a means of keeping the vocalists from sounding overcome.

The creation of this music came some months after the passing of Jim Dickinson, renowned studio musician and producer, and father of Cody and Luther, and the birth of the latter's first child. Little wonder, then, that the combination of joy and agony at the heart of blues music surges through "Ain't No Grave." Yet, even with that emotional core, NMAS' longstanding loyalty to the blues form reaffirms its status as stylist rather than innovator. But that doesn't make the group much less memorable as musicians, precisely because they are so direct in translating what they feel into what they play. Mavis Staples helps in that regard by wailing along on the acoustic-flavored country-blues/revival tune, "The Meeting."

Contrary to the connection The North Mississippi Allstars has fashioned to the jamband community through appearances at Bonnaroo, as well as its natural proclivity to jam, the group doesn't stretch out much here, except on a coda to "Hear the Hills" conjuring more than a little majesty. The trio, joined by guitarist Ry Cooder on "Ain't No Grave" and pianist Spooner Oldham at various junctures throughout, prefers to structure itself on tunes such as "How I Wish My Train Would Come," and this approach allows the band to effectively channel its feelings and, in turn maintain its composure under turbulent circumstances.

The single cover tune among the twelve originals is a truncated take on Bob Dylan's "Stuck Inside of Mobile With The Memphis Blues Again," which stands in the middle of this album as wry reminder and proof positive The North Mississippi Allstars is as comfortable with verbal as its is instrumental language. Ending with the barrelhouse romp of "Jellyrollin' All Over Heaven," Keys to the Kingdom hearkens back to The North Mississippi Allstars earliest and rootsiest records, but nevertheless represents a marked advance in maturity.

This A'Way; Jumpercable Blues; The Meeting; How I Wish My Train Would Come; Hear The Hills; Stuck Inside of Mobile With the Memphis Blues Again; Let It Roll; Ain't No Grave; Ol' Cannonball; New Orleans Walkin' Dead; Ain't None O' Mine; Jellyrollin' All Over Heaven.