Sun Ra: The Night Of The Purple Moon 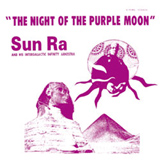 One of a rare handful of small group sessions, The Night Of The Purple Moon is one of bandleader Sun Ra's most accessible and enjoyable albums. Similar in scope to side one of Atlantis (Evidence, 1967), Cymbals (Evidence, 1973), New Steps (Horo, 1978) and Other Voices, Other Blues (Horo, 1978); this stripped-down studio session is a unique example of Ra's wide-ranging artistry.

Dominated by the sound of the Rocksichord (or, in Saturnian parlance, Roksichord) Ra plays the newly invented keyboard almost exclusively, adding a pair of mini-Moogs to a few solo pieces. Recorded in 1970 at Variety Recording Studio in New York with three core Arkestra members, the original quartet album is augmented with home recordings from 1964 featuring Ra alone on Wurlitzer electric piano. With the original master tapes damaged, this edition is remastered from pristine vinyl, lending the performances a warm, nostalgic quality.

The funky timbre of the Roksichord engenders the session with an often humorous quality, which Ra embraces with aplomb. The tunes are all short and quirky, blending joyous swing, subtle blues, rollicking funk and raucous abstraction in equal measure.

Davis alternates between various reeds on half the songs, lending percussive support to the rest. His caterwauling alto sax eruptions on the tumultuous "A Bird's Eye View Of A Man's World" and burbling alto clarinet on "21st Century Romance" are tempered by his mellifluous flute work on the plaintive "The All Of Everything."

A handsome reissue, The Night Of The Purple Moon is a welcome rediscovery and a fitting addition to an endlessly fascinating discography.