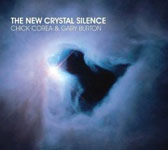 The circumstances that led to pianist Chick Corea and vibraphonist Gary Burton collaborating on Crystal Silence (ECM, 1973) are the definition of serendipitous happenstance. Neither thought the record would have wide appeal, yet it's gone on to become not only a classic for the label, but for both artists, who have since built large discographies with plenty of individual milestones. Recording infrequently as a duo, they've played together every year since that first meeting, with some significant globe-trotting in 2007 to commemorate their thirty-fifth anniversary together. The double-disc The New Crystal Silence documents that celebration with performances culled from dates in Australia, Norway and the Canary Islands.

The duo revisits material from Crystal Silence through to their most recent and fifth recording, Native Sense (Stretch, 1997), in addition to a new Corea tune and three standards. The second disc, from the Norway and Canary Island shows, finds the duet on their own and in top form. Anyone who caught a 2007 show knows—as their Portland Jazz Festival performance amply demonstrated—that amidst the stunning virtuosity, empathic interaction and subtle nuances is an almost mischievous playfulness. Some of this may be serious music, but Corea and Burton are clearly having fun.

The "new" comes with the first disc, where Corea and Burton have a silent third partner in British woodwind multi-instrumentalist/composer/bandleader Tim Garland. Garland doesn't perform, but was recruited by Corea to arrange five tunes from the duo's repertoire for the pianist, Burton and symphony orchestra—in this case, the Australian Sydney Symphony. This isn't the first time Garland has scored Corea material for orchestra—his "Fantasy on Crystal Silence" was a highlight of his own The Mystery (Audio-B, 2007), and also featured Corea as a guest. Here, his orchestration of "Crystal Silence" is more reverential, although there are moments of unexpected power during a tune that has always been more of a tranquil tone poem.

It's to Garland's credit that he finds the perfect blend of orchestration and improvisation. While there are open-ended sections that allow Burton and Corea to go where they will, Garland has turned Corea's compositions into miniature concertos, where the symphony weaves in and around solo and duet sections. Just how different the approach can be is clear with the two versions of Corea's Spanish-tinged "La Fiesta" included—a more form-based version with the orchestra on disc one and a looser, more fully extemporaneous duet version on disc two.

That Corea and Burton are in-tandem improvisers capable of taking great risks while consistently delivering near-perfect performances is what made their first recording a classic. It's hard to live up to Crystal Silence's iconic stature. Still, The New Crystal Silence proves that, as with any committed relationship, these two are never at a loss for fresh and relevant dialogue. The addition of Garland's orchestral arrangements only provides an even more expansive context around which Corea and Burton can continue to build and strengthen a pairing that's destined to last a lifetime.