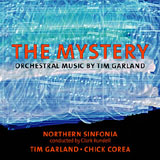 That musicians primarily connected to the jazz world possess greater stylistic multiplicity is nothing new. Nor is the concept of adapting jazz material to symphonic contexts. But British woodwind multi- instrumentalist Tim Garland is a rarity—an innovative improviser and composer who studied classical composition before shifting into performance and jazz at the age of twenty. His discography as a leader has largely focused on jazz, but the first signs of Garland's broader interests show up on Rising Tide (Sirocco, 2003), where his Storms/Nocturnes trio is augmented with a string quartet on two tracks. The ambitious If the Sea Replied (Sirocco, 2005) took things a step further with suite of material that incorporated the Northern Sinfonia's string section. But despite Garland's blurring of stylistic lines, its abundance of improvisational freedom made it still ostensibly a jazz record.

The Mystery is best categorized as a classical recording, featuring the full 36-piece Northern Sinfonia and a program of material largely composed by Garland. But in a time where the twain most certainly can and does meet, Garland also adapts material by Thelonious Monk and guest pianist Chick Corea.

Garland's triptych of Monk's "Trinkle Trinkle," "Ruby My Dear" and "Evidence" are in no way, shape or form "jazz with strings." Instead, Garland uses Monk's melodies as the foundation for sometimes dramatic, other times understated orchestral works that have little visible reference to the jazz tradition and bear only the slightest resemblance to their source. Still, Monk's quirky idiosyncrasies are translated into expansive works, demonstrating just how far a creative mind can take seemingly spare material.

Garland's adaptation of Corea's "Crystal Silence" ("Fantasy on Crystal Silence") begins with jagged abstraction and sharp dynamics. Corea has dabbled in classical music before, but his interpretation of Garland's score, which gradually finds its way to the familiar, lyrical theme, is perfect and uncanny. The defining markers are all there, but his integration with the orchestra is absolute. Garland's soprano takes increasing liberties within the confines of the form, a player who clearly understands that music isn't "this" or "that" but, instead, a grand spectrum where anything is possible.

Listening to The Mystery as a whole suggests that Garland's encyclopedic knowledge of jazz is equally matched with an appreciation for the longer history of classical music. From romantic interludes to more abstract modernistic passages, The Mystery is a record that breaks down barriers and convincingly asserts that labels, while being of some use to help position an artist and/or the music, ultimately only tell part of the tale. The only way to truly experience a narrative as rich and diverse as The Mystery is to hear it.