Claudio Scolari: The My Fourteen Songs

BY BUDD KOPMAN
September 17, 2006
Sign in to view read count 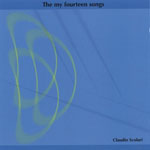 The My Fourteen Songs is Claudio Scolari's first release since 2005's Reflex (Principal). That album used many different sounds, textures and ambiences through electronics, drums and voices in order to explore the emotions that could be induced in the listener.

Scolari's current effort is a much more stripped-down affair with only drums, synthesizer, electric guitar and some voice. The complexity and layering of Reflex has been replaced with simplicity and directness. Each track has a different vibe, although they share a similar root.

The pieces are connected by the electric guitar of Donnie Romano, especially the effects he uses and the style he plays in. Staying mostly in the rock or blues rock vein, he explores a few different pentatonic scales, and anyone familiar with Jimi Hendrix's sound will recognize Romano's roots. Scolari sets up simple rhythms on his kit and uses synthesizer with various sounds to play the melodic riffs off which Romano flies.

There is virtually no harmonic movement, but rather usually a pentatonic root reinforced by the synthesizer or overdubbed guitar. What might seem potentially repetitive is minimized by the shortness of the tracks, which average four minutes each.

The issue then, is whether this record succeeds in conveying the aims of the composer. If I might rework Scolari's English, he says that "14 Songs is an attempt to expose new languages of expression to the listener, leaving the musics of jazz, blues and the avant garde. I try to stir and mix, to decompose and to recompose rhythms and melodies, giving new life and color to both ancient and new ideas."

The moods this music creates feel expansive and honest, and the simplicity removes any idea of searching for deep musical meaning—instead allowing the listener to escape into the overall vibe, which might just be a return to the '60s for those old enough to remember.