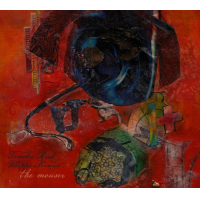 Cellist Tomeka Reid reveals another aspect of her artistry on The Mouser, on five unfettered excursions in the company of Italian percussionist Filippo Monico. Rather than the supple propulsion and poised angularity of her eponymous quartet (Thirsty Ear, 2015) or the AACM repertoire of Artifacts (482 Music, 2015), Reid concentrates on exploring the full resources of her instrument to respond in the moment to her fellow protagonist. Indeed, this is one of those albums where the focus is more on the dialogue between two people than any preconceived notions of the roles of the instruments themselves.

Reid's colleague Silvia Bolognesi, from the Hear In Now Trio, introduced her to Monico. Although they had never played together before, they went into the studio in 2015 to record, but the session was forgotten until Reid listened again in 2018 and liked what she heard. What is remarkable for such a first time meeting is that there is none of the tentativeness which sometimes afflicts such encounters. And furthermore they avoid the obvious, to the extent that you never quite know what is coming next in their restless exchanges. Even when one adopts a rhythmic approach, the other generally doesn't.

They move largely in consort for the whole 38 minutes of quick-changing invention. Reid assumes a variety of guises, even embracing time-playing on occasion, as in the stealthy loping riff pitched against brushed trapset and Monico's wordless moaning vocalization on "Without Recourse." The drummer displays a marked restraint, utilizing just a few elements from his arsenal at a time, in a cavalcade of percussive timbre. Only on "Intimations Of Things To Come" do his stuttering clatter and cymbal washes create anything like a dense soundscape. Other notable passages include the cellist's melodic bow-bouncing against strings on the title cut, where she even touches on blues tonalities briefly, and her siren effect on "Wefting Through A Starry Sky."

It is a pleasure to hear Reid so front and center on this uncompromising but absorbing disc.

Without Recourse; Walk Within The Eye Of The Storm; The Mouser; Wefting Through A Starry Sky; Intimations Of Things To Come.