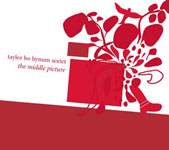 Tying together conceptual threads from his previous releases, The Middle Picture is cornetist Taylor Ho Bynum's most fully realized album to date. Making good on the promise of prior efforts, Bynum incorporates the relaxed spontaneity of his duet with drummer Tomas Fujiwara, True Events (482 Music, 2007), and the studied intricacy of his formal composing skills as featured on Other Stories (Three Suites) (482 Music, 2005), the debut record of his Spidermonkey Strings ensemble.

Taking a cue from renowned bandleaders Duke Ellington and Miles Davis (both covered here), Bynum tailors these open-ended pieces around the abilities of his favorite regular collaborators. Guitarist Mary Halvorson and violist Jessica Pavone, from the Brooklyn duo The Pavones, join forces with multi-instrumentalist Matt Bauder (Anthony Braxton, Transit), guitarist Evan O'Reilly and drummer Tomas Fujiwara for a mixed set of studio and live recordings that veer from haunting atmospherics to turbulent, emotional climaxes. As members of a vibrant new musical community, they play with the sort of egoless interaction indicative of shared experience.

The sextet navigates a wide dynamic range more typical of a classical ensemble than a jazz group. Quietly pointillist activity alternates with brief intrusions of knotty turbulence and dissonant catharsis. From the miniature, rough-housing version of Ellington's "Bluebird of Delhi" to the brief cinematic sketch of Miles Davis' "In a Silent Way," they operate at extreme ends of the sonic spectrum.

The three-part "JP & The Boston Suburbs" is the album's epic centerpiece. Knitting melancholy melodies, angular themes and kinetic rhythms to austere arrangements, the sextet weaves a multi-hued tapestry of sonic experimentation into a dense, rewarding suite.

Bynum holds promise as a member of a new generation of multifaceted improvisers leading the way into a new decade. The Middle Picture stands as one of many possible mile markers on the journey.