Tomás Doncker Band: The Mess We Made

By PAUL NASER
February 5, 2016
Sign in to view read count 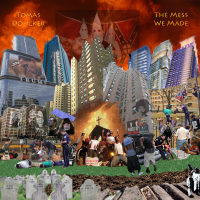 Prolific New York based guitarist/vocalist/composer Tomás Doncker Band's work can be recognized by its organic, soulful quality, it's true, but what sets him apart is the way his musical identity comes across in the wide variety of projects he conceives. Whether it's a tribute to blues legend Howlin' Wolf, or a collaboration with an award winning poet, Doncker's albums retain his unique compositional voice which can be described as groove-centric and bluesy but never predictable.

His latest record, The Mess We Made, was released in November of last year and is a direct response to the horrific attacks that took place at the Emanuel African Methodist Episcopal Church in South Carolina last June. Doncker explores many themes and emotions relating to the frustrations that communities of color experience while also considering the impact that modern technology and society have on our lives.

ADVERTISEMENT
Musically, the album is heavily produced and every instrument was played by either Doncker or his collaborator James Dellatacoma. This is a big change from his previous albums, which feature a traditional rhythm section and, consequently, the synergy of a live performance. Even so, the album is musically satisfying with Doncker and Dellatacoma taking full advantage of the tools at their disposal. The use of layering creates rich vocal harmonies and sonic textures that serve his compositional ear well, helping paint colorful backdrops for his songs.

As the subject matter of and inspiration for the album would suggest, the songs serve as vehicles for Doncker's lyrics and message. Highlights include an emotional cover of U2's "Still Haven't Found What I'm Looking For," the funky and politically charged "Blood and Concrete," the minimalistic and soul-stirring "Don't Let Go, as well as the soul influenced, light hearted yet serious "The Revolution."

Fans of funk, blues rock and politically charged music won't want to miss Doncker's latest and will undoubtedly want to keep an ear out for the next release from this creative songwriter.

Some Ol' Dolls; Church Burning Down; The Revolution; Mess We Made; Don't Let Go; Blood And Concrete; Still Haven't Found; Time Will Tell