By Walter Kolosky
November 20, 2002
Sign in to view read count 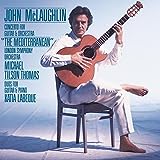 Recorded in 1988 but not released until 1990, The Mediterranean was composed by John McLaughlin and orchestrated by Michael Gibbs. Michael Tilson Thomas conducted the London Symphony Orchestra, as he had for McLaughlin’s Apocalypse fourteen years earlier.

As expected, the orchestra sounds, well, orchestral. But, there is something thrilling about hearing McLaughlin’s unusual melodies emanating from such a traditional source. The Concerto sounds nothing like Apocalypse and nothing like jazz, although McLaughlin does improvise in certain sections. It is, however, yet another validation of McLaughlin's versatility as a musician and a composer-arranger. The orchestra drowns out his acoustic guitar at times, but his presence is still palpable.

I had the pleasure of seeing the 1986 world premiere of the Concerto, featuring McLaughlin and the Los Angeles Philharmonic. The piece was very well received by the crowd and by local classical music critics. (Miles Davis was also in the audience.) The Concerto featured many of McLaughlin's trademark riffs expanded into coherent streams and themes. His playing was, as always, evocative and energizing.

Five pieces for guitar and piano also appear on the album, and that's where the jazz happens. Katia LaBeque, a gifted classical musician who was also McLaughlin’s love at the time, joins in. The tunes are jazz thematic in nature and are quite dynamic. The most pleasing piece is "Zakir" which McLaughlin has presented in several different contexts over the years. All in all, the album is yet another impressive example of John McLaughlin’s ability to occupy many musical worlds.