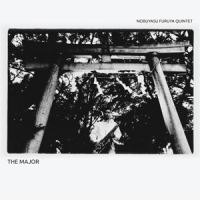 Japanese born reedman Nobuyasu Furuya splits his time between his native country and Portugal, where The Major was captured. Furuya first came to prominence in the free jazz big band, Shibusa Shirazu Orchestra, before moving to Lisbon, where he recorded two previous sets with musicians from his current band: the well-received Bendowa (Clean Feed, 2009) and Stunde Null (Chitei, 2010). Furuya takes an unusual approach. The sleeve of this limited edition LP states both that all tracks were composed and conducted by Furuya, and that all tracks were performed and improvised by all five participants. The six cuts play this out by displaying compositional intent in terms of dynamics and arrangement, but without written thematic material.

Furuya's quintet includes four Portuguese musicians, including the members of the acclaimed Red Trio—pianist Rodrigo Pinheiro, bassist Hernani Faustino, and drummer Gabriel Ferrandini—and joined here by trombonist Eduardo Lala. Furuya proves an exciting improviser with energy, passion, and technique to spare, especially on tenor saxophone. The four Portuguese musicians skillfully follow Furuya's lead, with Lala's blustery trombone tracing a broad impasto around the principal's statements. The Major does not have the space and open egalitarian structures of the Red Trio discs, heard to good effect on Empire (No Business, 2011), their collaboration with English saxophonist John Butcher. Faustino and Ferrandini acquit themselves well, but more in the guise of a conventional rhythm section, while Pinheiro remains largely submerged within the ensemble cut and thrust until the second side.

There is, however, much that merits attention. "Jap Agitator Caught Again" forms a swirling blistering anthem loosely built around tonal centers with the horns trading conversational lines. "D.O.O. (Development of Our Own)/ Declaration From Detroit" presents unfettered expression by tenor first, then trombone and finally piano, each in the company of roiling bass and drums, book-ended by two explosive group outbursts. Pinheiro shines on "When No Saints Go Marching In," rubbing the strings and adding off kilter percussive effects, after some purposeful interaction between the leader's light airy clarinet and Faustino's dancing bass. But the concluding "To The Valley Of Paradise" with its intriguing timbral interplay of dampened piano keys, random scrapes and saxophone squeals, convinces most, becoming increasingly spirited, and acting as a dashing counterpart to the opener. While the disc amply showcases Furuya's conception, this author can't help think that it might have been more compelling if everyone had been left more to their own devices.

Jap Agitator Caught Again; D.O.O. (Development of Our Own)/ Declaration From Detroit; Colored To Cell - Japs To Hell; Where Are The Brothers and Sisters - They Went To Apple Orchard; When No Saints Go Marching In; To The Valley Of Paradise - yea though I walk through the valley of the shadow of death I will fear no evil for I am the evilest son of a bitch in the valley.