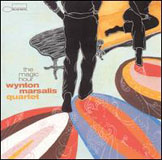 Those with an interest in polemics will interpret the title of the first tune on The Magic Hour, "Feeling of Jazz," to be another example in Wynton Marsalis' campaign to define just what is and is not jazz. Given that the lyrics performed by Dianne Reeves read like a dictionary entry for jazz circa 1935 (or earlier), it's difficult to ignore the possibility. Even so, polemics are generally an obstacle to musical enjoyment, and no matter which side of the Ken Burns divide you prop your tent on, it's impossible to deny that this latest Marsalis collection represents a work of superior craftsmanship.

From opening to closing note, Marsalis' tone is simply luxuriant, with a sound so clean and pretty it becomes a pleasure to just sit back, close your eyes, and dream backwards in time. Critics of the mode would undoubtedly argue that this is the very problem with The Magic Hour , and that Marsalis' nostalgia-driven jaunts down memory lane lead us around in circles, but if it sounds this good, who really gives a damn?

Driven by strong, pared down swing rhythms, tunes like "Feeling of Jazz," "Big Fat Hen," and the jaunty "Skipping" dictate the album's overall mood of simple pleasures. The highlights, however, come in the form of the final two tracks. A dignified ballad, "Rosie Rose-Rosalee" provides an ideal showcase not only for Marsalis' striking tone, but also his ability to perform subtle, poised improvisations. This tune gives pianist Eric Lewis and bassist Carlos Henriquez a chance to exhibit their considerable talents as well.

The Magic Hour may not break already-high expectations for Marsalis' work or shatter genre boundaries, but it stands as a joyful testament to exceptional musicianship.

Feeling of Jazz; You and Me; Free To Be; Baby, I Love You; Big Fat Hen; Skipping; Rosie Rose-Rosalee; The Magic Hour.