By Troy Collins
December 19, 2006
Sign in to view read count 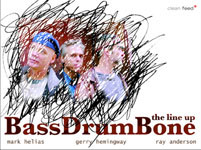 2007 marks the thirty-year anniversary of BassDrumBone. Trombonist Ray Anderson, bassist Mark Helias and drummer Gerry Hemingway have been playing in this configuration on and off for almost three decades. They continue to convey enthusiasm for this project with palpable joy. The Line Up is their eighth official album and quite possibly their most enjoyable effort to date.

Each member of the trio contributes three compositions. Despite the stylistic variety, which drifts from tender ballads, expressive blues, rousing second-line struts and greasy funk grooves to atmospheric explorations, these pieces exude a cohesiveness born of maturity and long-term camaraderie.

There is no de facto leader in BassDrumBone, a trio of equals. Anderson's trombone initially appears to be the focus, but he just as often plays a subdued support role for Helias to take the lead, or lays out to allow Hemingway ample space to accentuate the harmonic implications of the tune. All three members are responsible for equal parts melody and rhythm, and in a sense their roles are interchangeable.

Ray Anderson has long been one of the most exciting trombonists in new music; his bright, buoyant tone and humorous phrasing emanates optimism. Even in the throes of somber meditation, there is an undeniable underlying sense of hope in his tonality. Equally capable of avant gutbucket squealing, rip-snorting tailgating, mellifluous delicacy and impressive chromatic runs, his talents are vast.

Drummer Gerry Hemingway is a solid tunesmith. He shares a talent for sing-song melodies with his trio mates that engenders this session with an air of sanguinity. This translates to his delightfully melodic percussive approach. His youthful studies of African music and their reliance on tuned instruments continue to resonate in his conception.

If Anderson is a rhythmic melodist and Hemmingway a harmonically astute percussionist, then it is left to Mark Helias to fill in the space between. Whether plucking out deep, sinuous bass lines or bowing resounding arco glisses, his contributions are the fulcrum on which the trio operates.

Like a well-oiled machine, BassDrumBone's interplay is piston-perfect. Modulating their approach within each tune, the players vary tempo, rhythm, tonality and structure, but with a casual sensibility that can only come from the sort of experienced rapport veterans enjoy.

Thirty years and still going strong, this trio has grown together into something rare, a longstanding group of players who share common histories and aesthetic outlooks. The Line Up is a beautiful, vivacious album and a testament to their creative longevity.

Visit Gerry Hemingway and Mark Helias on the web.