By Dan McClenaghan
April 30, 2016
Sign in to view read count
Track review of "The Linda Sessions" 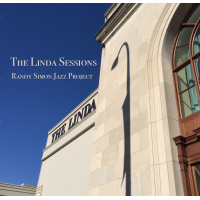 The Randy Simon Jazz Project brings to mind, on The Linda Sessions, a high end sports car in top condition zooming down a straight highway, with a rhythm section/drive train boosted by a piano and a guitar. The sound is clean, momentum smooth and straight forward. The tune—the opener of a two CD set—is "Just Deal With It." The band is as tight as a late fifties/early sixties Blue Note Records session, featuring the four man rhythm section with a trumpet and sax.

Randy Simon put it all together, but he doesn't play. His Randy Simon Jazz Project website introduces him as a "scientist, radio host and businessman living in upstate New York who moonlights as a jazz composer. " Based in Upstate New York, rather than the jazz capital in New York City, Simon's "project" features some of the top players in the Albany region, in a vibrant, live-in-the-studio atmosphere that results in lively, top-notch sounds.

"7 Mile Beach" sounds like one of those Freddie Hubbard/Junior Cook sessions from Blue Note, with trumpeter Dylan Canterbury laying down a string sizzling of ideas on his solo, giving way to Kevin Barcomb's smoldering tenor sax. The soloing throughout—it sounds like Simon leaves a lot of room for personal expression—is unwaveringly superb: pianist Rob Lindquist's exuberant turn on "Weave The Tale;" trumpeter Dylan Canterbury's liquid ruminations on "Moorea Lagoon," guitarist Chuck D'Aloia's tangy-sweet single-noting on the same tune, a composition that, along with "Poipu Walk" speaks to the inspiration of tropical landscapes.

The Linda Sessions serves up two disc's worth of first rate modern jazz by some lesser-known performers.

CD 1: Just Deal with It; 7 Mile Beach; What's Cooking?; Poipu Walk; Metropolis; Santa Cruz. CD 2: Weave The Tale; Moorea Lagoon; Don't Give Me That; Dreamscape; Head Down The Road; How Did We End Up Here Again?.