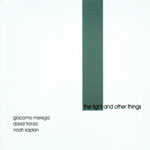 This is an impressive record composed of ten improvised tracks whose titles are inspired by the work of Paul Klee. Klee, a Swiss cubist painter, may be relatively unknown—as is gifted guitarist David Tronzo—and what the artfully omitted subordinate clause of the album's first track might say is unclear, but it's helpful to know the first, important to know the second and hopelessly imperative to know the latter.

Although there are several tracks that have bits that sound like hesitant drumming, there are two tracks that actually name-drop the instrument in their titles, "Amateur Drummer" and "Light Drum Roll." "Amateur Drummer" is a clever, chromatic track. It begins with the tempered crescendo of a storm, erupting into an angry, grungy bit. There are dissonances throughout, but these work because there is a certain braveness about allowing the music to take form as it does, although there are moments where the trio pulls back to create structure. But there are no drums. We know this as listeners, because we know this album has no drums, because we see names of musicians whose relationship to instruments we know well, because we know these titles are less explanatory and more revelatory. But knowing all this makes it no less satisfying to hear, for example, Giacomo Merega's beautiful bass notes sound like a drumming heartbeat. Merega, in fact, accompanies Tronzo with apparent ease and dexterity and the chameleonic quality of his playing matches Tronzo's throughout the record. Noah Kaplan's saxophone plays a less radical role, but it is meditative and elegiac, notably in "Rhythmic Landscape with Trees"; even when the sax is in the background, subdued, it communicates a wild tenderness that coaxes listeners to feel the encompassed emotional range. This is a record packed with background and metaphor, none with which the listener must be familiar, because the music within conveys a radiant emotionality.

Once Emerged in the Grey of Night; Amateur Drummer; Destruction and Hope; Red Balloon; Figire in the Garden; With theGreen Rectangle; Rhythmic Landscape with Trees; Light Drum Roll; Drawing with the Fermata; Chorale and Landscape.