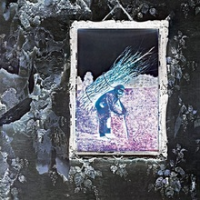 "It might seem a bit incongruous to say that Led Zeppelin—a band never particularly known for its tendency to understate matters—has produced an album which is remarkable for its low-keyed and tasteful subtlety, but that's just the case here. The march of the dinosaurs that broke the ground for their first epic release has apparently vanished, taking along with it the splattering electronics of their second effort and the leaden acoustic moves that seemed to weigh down their third...

... and a couple of songs that when all is said and done, will probably be right up there in the gold-starred hierarchy of put 'em on and play 'em again. The first, coyly titled "Rock And Roll," is the Zeppelin's slightly-late attempt at tribute to the mother of us all, but here it's definitely a case of better late than never. This sonuvabitch moves...

...[and the second,] "When The Levee Breaks," strangely credited to all the members of the band plus Memphis Minnie, and it's a dazzler. Basing themselves around one honey of a chord progression, the group constructs an air of tunnel-long depth, full of stunning resolves and a majesty that sets up as a perfect climax."

What constitutes a "monument" in rock music? And just to limit this, "classic rock" music from 1965 to 1980. By 21st Century standards it might be recordings whose constituent songs (typically more than two) are repeatedly played (often ad nauseum) on what passes as "Classic Rock" radio. Was I to consider my local programming, which is to be sure, is safe and predictable, I would have to say, off the top of my head: Lynyrd Skynyrd's Second Helping (MCA, 1974); ZZ Top's Tres Hombres (London, 1973); the Rolling Stones' Goats Head Soup (Rolling Stones 1973), Some Girls (Rolling Stones, 1978), Fleetwood Mac's Fleetwood Mac (Reprise, 1975) and Rumours (Reprise, 1977); the whole goddamn Eagles' catalog....

Led Zeppelin IV, AKA, Untitled, was that perfect adolescent earthquake felt by every 13-year old boy (okay, well, at least this one) standing in line outside of J.C. Penney on Monday, November 8, 1971, in the rain, to purchase the LP. From the initial rev of Jimmy Page warming up his electric guitar before Robert Plant launches "Black Dog" to the blues-crunch perfection of Memphis Minnie's "When the Levee Breaks" is every bit a rock music monument, if not the rock music monument.

After the uneven and disappointing Led Zeppelin III, there was some question in my teenaged mind whether the band could achieve once again what they did on the first two recordings. Needless to say, "Black Dog" soothed my worried mind. Each of LZ's albums started with commanding rock songs: Led Zeppelin sported "Good Times Bad Times," while Led Zeppelin II blasted off with "Whole Lotta Love." Even the uneven Led Zeppelin III caused a chain reaction with its opening "Immigrant Song." It seemed as if LZ was changing the rules to the rock game with every release. "Black Dog" is a significant plateau in the evolution of both rock and LZ and may be the most definitive of album openers. Jimmy Page's elaborate guitar riff coupled with John Bonham's forward-thinking rock drumming serve as the bedrock propelling Robert Plant's atmospheric vocals over the top. Plant was to never to sound this good again.

Before the listener can catch his or her breath, Bonham launches a relentless push on snare drum and hi hat that fully receives it momentum when Page breaks in with the most familiar of rock riffs. It is appropriate that this piece be called "Rock and Roll." Written from a spontaneous jam while trying, and mostly failing, to wax "Four Sticks," Bonham threw off the intro to Little Richard's "Keep a Knockin'" and Page obliged with his guitar part. The result was a retooling of Chuck Berry, Jerry Lee Lewis and the blues as a sonic crime scene in the making. It was released as a single with "Four Sticks" as its B side.

"The Battle of Evermore" foreshadowed inspiratory allusions to J. R. R. Tolkien's The Lord of the Rings employed throughout the following "Stairway to Heaven." A page-mandolin driven, "Evermore" is a direct descendant of "Gallows Pole" from Led Zeppelin III. John Paul Jones adds depth with his acoustic guitar It furthers Page's proclivity for mashing up Celtic, blues and British Folk sounds. Plant shares vocals with Fairport convention's Sandy Denny in a swirling opium dream of the campfires of war in the Middle Ages. All to say about the next song, whose title I will not say, but whose initials are "STH" is that it has become a part of the collective unconscious of the Baby Boomer generations and beyond. It lives as a testament to the power of drummer Bonham, and features Page's best and most memorable guitar solo.

STH concludes side one of the original LP. Side two begins with what became the B-side of "Black Dog," "Misty Mountain Hop." Jones plays a slightly overdriven electric piano, establishing a relentless rock momentum picked up and solidified by Bonham's immediate drumming. "Four Sticks" is a barrel roll, again featuring Bonham's power and drive, propelling Page and Jones over the top. "Going to California" is LZ's "California Dreaming," a little bit of harmless west coast fluff while the west coast still has the fragrance of the "Summer of Love."

Led Zeppelin IV ends with the band's most definitive take on the blues to date, "When the Levee Breaks." Subjugated from its composer, Memphis Minnie (1897—1973), the song features one of drummer Bonham's most identifiable groves, which establishes the songs momentum in the introduction. Page plays slide guitar. Page may be a master in the control room and an excellent lead guitarist to boot, but he is, at best, a mediocre, slash-and-burn slide guitarist. It is precisely Page's limitations that make "Levee" so compelling. He manages to mold the style and genre again into art of his own image, producing the master piece of this masterpiece.