Various Artists: The Kings Of Highlife 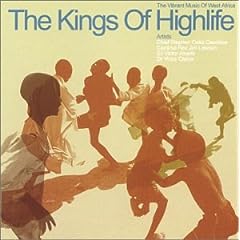 Around the time highlife was born in West Africa, horns were fading out and the guitar was assuming their place as the most popular lead instrument. The earliest highlife was a variation on the big band concept, with an enlarged rhythm section and brief instrumental solos spaced between well-harmonized themes and vocal passages.

As time went on, the genre diversified and went through many changes. This compilation does a nice job of representing some of the biggest names from these phases of Nigerian highlife, each with his own approach to the music. It comes to us from Lagos's Premier Music label via Wrasse Records (UK). A long road indeed for these Kings.

Remember that this is popular music, dance music, not the kind where instrumentalists travel long roads through many changes of key. Highlife keeps it real simple.

One of the most interesting aspects of the record is the role of the guitar. In Chief Stephen Osita Osadebe's "Osondi Owendi" (Sweetness and Bitterness), the first plucked notes herald events to come. When the calypso theme kicks in, the guitars get busy criss-crossing back and forth in clean syncopated rhythm (along with bass and plenty of drums). Osadebe sings like an honest storyteller, pacing his extended Ibo lyrics and adding enough occasional lilt to maintain an element of surprise. (According to the liner notes, this 1984 record sold 700,000 copies.)

Despite its blurry, distorted sound, Dr. Victor Olaiya's "Omo Pupa" is an enjoyable detour. Its easy rhythm and melody are certainly infectious. The combination of the guitar as a lead with a old-timey harmonized horn section lend it a mixed up flavor. A similar effect is evinced on Chief Inyang Nta Henshaw's Carib dance number, "Esonta." Henshaw's vocals on this piece are much more cleverly phrased and executed, gaining raw energy from their rhythmic play.

Unfortunately three problems mar this recording. One is the sound quality, which is just downright dirty much of the time. Avoidable? Probably. The second is the relatively meager documentation, which does not do these masters justice (since the history is half the point). Curiously, significant parts of this text are nearly identical to summaries published by the All Music Guide. And finally, the track by Wura Fadaka is a complete disaster. Who ever thought it would be clever to feature a highlife band that uses a drum machine? Hello, folks? We like real drums!

So this compilation is a mixed bag. You get some amazingly revealing performances and the cream of the crop from major artists, with a few blemishes. All in all, a worthwhile trip.

Visit Wrasse Records on the web.