The Crimson Jazz Trio: The King Crimson Songbook Volume One 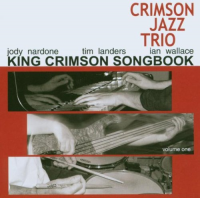 With all manner of jazz musicians reinventing the music of contemporary pop artists today, it's inevitable that somebody would decide to take a close look at the cream of progressive rock, reinventing it in a more decidedly jazz context. If artists like Brad Mehldau can reshape Radiohead, then why not re-examine King Crimson, a seminal influence?

Enter Ian Wallace, drummer for the Crimson incarnation that released Islands (Island, 1971). While on tour in 2004 with 21st Century Schizoid Band—a group of ex-Crimson members who relatively faithfully recreate songs from In the Court of the Crimson King (Island, 1969) through Islands, in addition to other like-minded material—Wallace had the idea for reinventing classic Crimson material in a piano trio format.

Enter pianist Jody Nardone and bassist Tim Landers—two big Crimson fans—and the Crimson Jazz Trio (CJ3) was born. The group's first release, The King Crimson Songbook, Volume One, is not only surprisingly faithful to the essence of the eight songs it covers, but the general arrangements as well, while shifting them firmly into the jazz mainstream.

If there is any criticism of these pieces, it's that they are almost too faithful. Mehldau sometimes refashions material so that it's almost unrecognizable; CJ3's interpretations never stray too far. For progressive rockers coming to jazz, this might be a good thing, but for more seasoned jazzers for whom King Crimson is part of a broader musical continuum, this approach may seem too safe. Despite the fine playing on The King Crimson Songbook, Volume One, one wonders what might have happened had these three players been a little more adventurous and taken the material a little further.

Still, there are some surprises to be found. The brightly swinging "Ladies of the Road" is the only song from Wallace's time with the group. The industrial intensity of "21st Century Schizoid Man" from In the Court of the Crimson King is reinvented first as contemporary lounge music, then moves into a more fiery solo section. "I Talk to the Wind," from the same album, retains its pastoral beauty, while the bluesy "Cat Food," from In the Wake of Poseidon, plays it straight, yet manages to suggest pianist Keith Tippett's free style playing on the original. Landers takes the lead on "Matte Kudesai," from Discipline (EG, 1981), giving the tune a Jaco Pastorius-like interpretation.

The title track from Red (Island, 1974)—a hugely influential song to progressive metal groups like Tool—works best. It clearly references the elements that define the original, but it's more liberally worked over, with a funky rethinking of the orchestral middle section featuring a powerful drum solo from Wallace.

The King Crimson Songbook, Volume One is an intriguing reshaping of material from a band that has always had a tenuous relationship with the jazz aesthetic. If there's a Volume Two, perhaps more time together will find CJ3 taking more risks with the material, a move more in keeping with the ongoing Crimson spirit of Robert Fripp, the only original member to be involved in every Crimson incarnation.

21st Century Schizoid Man; 3 of a Perfect Pair; Catfood; Starless; Ladies of the Road; I Talk to the Wind; Red; Matte Kudesai.