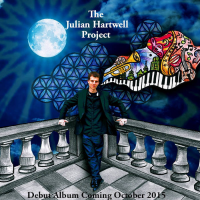 A regular performer throughout the Philadelphia, PA area over the last ten years, pianist/bandleader and educator Julian Hartwell, has brought together a band of young up-and-coming musicians from the area's vibrant jazz scene for the production of The Julian Hartwell Project, the group's self-titled, all-original debut album. Featuring eight original compositions, the music highlights a light ensemble that has little problem sounding like a formidable big band and use their high-octane approach to blend elements of R&B, funk and bebop sounds into a tasteful package of modern jazz. A graduate of Temple University who teaches piano and has shared the stage with the likes of Christian McBride and Jimmy Heath, Hartwell is one of the young lions of jazz in the making.

The pianist introduces his first original "Street Dreams," a ten-minutes plus high-energy piece that features several sprite solos from members of the band among them, saxophonist Seth Ebersole and trombonist Harry Forlenza-Bailey. Playing fast and furious, the band swings on the lively "Doubleshot" which showcases a torrid high-pitched solo from trumpeter Noah Hocker, Ebersole on tenor and {[Tom Cullen}}'s splashy cymbal work as well as the pianist's own deft right-hand dance on the keys on a burner of a tune.

Hartwell and crew lay down one contemporary-like sound on the mid-tempo "It's The New," and then decide to go a little funky on the moody "Stay Easy Bro" with Hartwell on the electric piano, this piece demonstrates the range the band can reach. Perhaps the most beautiful original of the set, is the delicate "Stranger Now" featuring the pianist on a superb solo, warm brush strokes from the drummer and a nice take-away from trumpeter Hocker as the band joins in on what turns out to be, the soft spot of the disc.

A defining piece of the session is probably the pick-up and gyrating "Say No More" where Hartwell's talents as a composer seem to come to the fore on a challenging direction-changing tune however, the most ambitious track of the album, hast to be the finale piece "Knew Blews" at almost eleven-minutes in duration. Well worth a sample and repeated spins, The Julian Hartwell Project offers a splendid slice of straight ahead jazz delivered with a fresh new sound. Presented by a gifted pianist leading a group of young talented players in their first recording together, this is one musical project that begs for an encore.