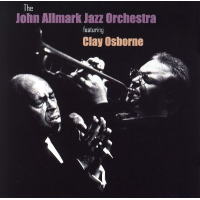 John Allmark has been fine tuning his jazz orchestra for six years culminating in this their maiden album. Not only has Allmark garnered top jazz players from the New England area, e.g., trombone player Rick Stepton and first call bassist, Marshall Wood, he has also obtained the services of New York arranger Robert Freedman. The outcome is a session of arousing interpretations of well-written band charts, great ensemble playing and high-flying solos. Mix in the crooning of Clay Osborne and memories of listeners of earlier generations will be flooded with images of those days of those large, ornate ball rooms and night clubs which were habitues of dancers and big band music fans who just liked to listen.

Crooner/scatter Osborne is featured on tender ballads such as "My Foolish Heart" and classic swing swingers such as "Bye Bye Blackbird." The latter also offer an Arnie Krakowsky's tenor solo and Osborne scatting a la Mel Tormé. The bell ringing up tempo material is the band's province. They romp on "There Is No Greater Love" with strong solos by Dino Govoni and Terry Anthony on tenor sax and the leader's wailing trumpet, all underpinned by the walking bass of Bronek Suchanek and the rhythm rapping of Vinny Pagano's drums. This is one of the more exciting tracks on the CD. Osborne's wordless vocalizing exchanges with John Allmark's dirty blues trumpet on "Shopping Mall Blues." The key line in this tune is "come home baby. I've the shopping mall blues. You been spending my money try to buy a 1000 pairs of shoes." A plea that hits home with any father of teenage daughters.

There is nothing in sound that gets the heart beating and the toe tapping than that of a well rehearsed big band playing pulse racing orchestrations and solos. It never seems to get old and with outfits like Allmark's still recording, it's not likely that it ever will.

Bye Bye Blackbird; Shopping Mall Blues; There Is no Greater Love; My Foolish Heart; Don't Get Around Much Anymore; Old Folks; Just One of Those Things; The Shadow of Your Smile; I Love You; Here's That Rainy Day; Moody Street; Georgia on My Mind