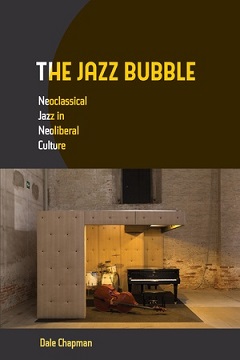 What explains vibraphonist Stefon Harris giving a TED talk at a conference devoted to behavioral finance? Why would one of the world's largest investment banks sink $10 million into the New Orleans Jazz Market—home to the New Orleans Jazz Orchestra? What was the thinking behind the major record labels' investment in the post-bop revival spearheaded by Wynton Marsalis in the 1980s? And why, with jazz clubs closing and jazz CD sales at the bottom of the league table, do financial institutions continue to cosy up to a musical genre that continually appears to underperform?

In this fascinating study, Dale Chapman, Associate Professor of Music at Bates College, Maine, address these and similar issues. In doing so he helps illuminate the political economy of jazz in the twenty first century. Via a series of case studies that range from the music itself to record label ideology and the myriad financial manoeuvrings behind the setting up of jazz venues, the author joins the dots between between culture and socio-economics in an era of global financialization. For Chapman, neoclassical jazz can serve as a prism through which to understand late twentieth and early twenty first century capitalism, and the story he weaves is a compelling one.

Harris' aforementioned TED talk from 2011 was entitled "There are no Mistakes on the Bandstand." For Chapman, the title epitomizes jazz's much lauded capacity to embrace risk and to grasp and grow from the opportunities risk presents. Risk is a recurring theme throughout the book's six chapters: from risk—or lack thereof—on the bandstand (and the ideologies behind it), to the adventurism of private and public financiers who seem to see in a certain kind of jazz shared values and philosophies. Chapman points to the lavishly financed jazz performing arts centres in New York, San Francisco, Los Angeles and New Orleans as the most visible examples of ways in which state and corporate actors are attracted to jazz as "as site of urban philanthropy."

For industry, the author suggests, jazz's improvisational dynamism is an attractive template for corporate strategy, internal business dynamics, and above all, the seizing of the moment. With a keen nose for irony, however, Chapman points out that the neoclassical jazz of the 1980s and early 1990s seized upon by major labels and various investors—both profit-seeking and philanthropic—was retro and conservative in essence, an opinion cleverly demonstrated in a chapter that compares the respective philosophies of risk taken on the bandstand by Miles Davis' second great quintet and that of Wynton Marsalis two decades later.

With an historical sweep that covers America post-Civil War to the civil rights era and beyond, Chapman places the musical risk taking of Davis' highly influential quintet—specifically the "collaborative ambiguities" of its rhythm section—within a wider context of racial inequality. With persuasive logic, the author draws a comparison between the Afro-American responses to the economic uncertainty brought about by their socio-economic and political marginalization, and the risk-taking and improvisation inherent in the rhythms powered by Tony Williams, Herbie Hancock and Ron Carter. Davis' habit of taking interpersonal risks, suggests Chapman, translated onto the bandstand where "freedom and responsibility are held in tension through the shared currency of risk."

The neoclassical jazz musicians that emerged in the 1980s were clearly influenced by Davis' quintet of the second half of the 1960s, though, as Chapman states, there was an inherent difference. The author contrasts Davis' quintet's "on the fly" approach with the "meticulously rehearsed" logic of Marsalis' group [Jeff Tain Watts, Robert Hurst, Kenny Kirkland] which, for the author, espoused a clear hierarchy, whereby a codified vocabulary went hand-in-hand with "non-negotiable virtuosity." For Marsalis, Chapman posits, the stakes were raised for the individual, with clear lines between performative success and failure. This chapter, with Chapman's thought-provoking insights into the musical role of Davis as leader, and of the dynamics between Hancock and Williams in particular, will be of particular interest to the general jazz fan.

For Chapman, the roots of the neoclassical jazz revival began not with Marsalis and co in the 1980s, but in the mid-1970s with the likes of Scott Hamilton and Woody Shaw. The turning point, however, came in 1976, with the triumphant return to New York of Dexter Gordon, after fifteen years of European exile. In a fascinating discourse where the author's intellectual rigour is matched by the energy of his writing, Gordon's great comeback, treated at the time by some gushing commentators as an event of near messianic import, is framed by the author not in purely musical terms, but significantly, as a metaphor for the decline and renewal in late 1970's American/New York culture.

Against a backdrop of fiscal crisis, social service cuts, rising urban violence, conservative accusations of cultural degeneracy—aimed at the African-American, Latino/a, immigrant and LGBTQ communities—and with punk rock and disco challenging musical/sexual conventions, Gordon was hailed by some in the jazz media as a reassuringly robust figure of integrity—a nostalgic symbol, perhaps, of former, less turbulent times. Throughout the book Chapman's symbiotic weave of political-economic and socio-cultural analysis is never less than thought-provoking, and consistently persuasive.

To understand the mores of 1970s New York the author casts a sharp analytical eye as far back as the post-bellum years of the letter half of the nineteenth century, painting a stark picture of the systematic, institutional racism that discriminated against Afro-Americans in all aspects of their existence. The artistic and cultural vibrancy of New York during the mid to late 1970s, Chapman argues, came about not in spite of the major socio-economic upheavals that began in the 1940s with the devastating, decades-long infrastructural projects that displaced tens of thousands of working class people, but in many ways, because of it.

It's one of the strengths of Chapman's steerage that the often complex links between politics, economy, identity and culture are, in the main, so vividly depicted. The chapter dealing with the political economy of Verve Records and the final two chapters that deal painstakingly with the financial jockeying involved in the establishment—and eventual closure—of high-profile jazz venues in California, on the other hand, will likely appeal most strongly to academics and economists.

In the end, one comes away with the overriding sensation that the notable success of the neo-classical jazz artists in the neo-liberal 1980s, which, for example, saw consecutive Joe Henderson CDs shift well over six figures each, was the result of careful evaluation of market trends by the record labels. The numbers don't lie, but there's certainly pause for thought in the evident regret that Christian McBride expresses—in hindsight—regarding those financially lucrative, neo-classical jazz-friendly years: "The whole 'young lions' hype, which unfortunately, I was part of, peaked in the early 1990s. I say 'unfortunately because the hype was so strong, I don't think any musician from that 'movement' will ever be looked upon by certain people as serious musicians. We'll all be looked at as puppets for record companies and managers, or People magazine-type personalities as opposed to, well, Down Beat magazine-type personalities."

The peculiar relationship between neo-classical jazz and neoliberal, capitalist culture may lie at the heart of The Jazz Bubble..., but Chapman's real achievement is to lift the stones and peer with intense scrutiny at nothing less than the beating heart of American culture itself. A sometimes challenging but essentially rewarding read, Dale Chapman's The Jazz Bubble is a notable addition to the burgeoning academic literature on jazz and the cultures surrounding it.