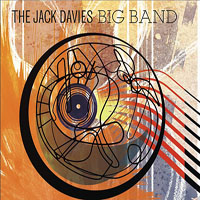 Composer/trumpeter Jack Davies is nothing if not eclectic. His current catalog of releases includes the unusually configured chamber quartet, Flea Circus, featuring bass clarinet and accordion. Simultaneously, Davies has released a contemporary quintet collection that channels Miles Davis by way of more modern influences. While both of these recordings are stellar, Davies' crowning achievement of the moment is his forward-thinking approach to the large ensemble sound. The Jack Davies Big Band's self-titled debut is a distinctive, cutting edge ensemble that adheres to neither classic or avant-garde form, but to something more liberated.

The low register horns that launch "Entropy" belie the circumstances to come. As the name suggests, this piece becomes somewhat anarchic in structure. Those stately horns produce the effect of a pasodoble before a piling on of reeds and brass that leads to saxophonist Josh Arcoleo's often blistering solo. The larger band adheres to more prearranged form while the tenor, at times, improvises wildly. A bit of Joe Wright's electronic reverberation rounds out the general state of inclusiveness that benchmarks The Jack Davies Big Band.

"(I Had) A Bad Dream" incorporates a frenzied and heated style that initially seems to accept the rules of composition but quickly unmoors from anything that systematic. What remains is not anchored in conventional timing or thematic development but is exceptional in its radicalism, as melody and structure collide in a mass of sound. Guitarist Alex Munk is featured in a raucous "Telescreen," the first movement of the five-part "1984 Suite." It is a shambolic piece on the surface, but its vigilantly crafted texture becomes more evident on repeated listens. The suite concludes with a more subdued Munk on "Mr Charrington's Shop"; the luminous-turned-dark conclusion builds up with the help of Arcoleo's solo, and then brings in the whole group for a theatrical close.

Davies has played with Colin Towns' Mask Orchestra, and Towns—the producer of this collection—leaves an indelible mark without over-influencing the final results. Django Bates—with whom Davies has also composed—is an equally obvious inspiration, but neither of these high-profile partnerships overshadows Davies' unique skills as a composer and arranger. He employs a distinctive style of musical entrapment-creating pastoral settings that barely hint at the building complexity of his pieces.

Entropy; (I Had) A Bad Dream; Some New Infection; I Will Wait For You/You Will Wait A Long Time; Circle; 1984 Suite: Telescreen, If There Is Hope, Dance Of The Proles, Thrush Song, Mr Charrington's Shop.