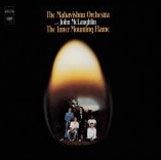 The Inner Mounting Flame was the first album which totally captured the power of hard rock and the freewheeling improvisational aspects of jazz. Larry Coryell, Miles Davis, and Tony Williams' Lifetime had tried something like this with some success in previous years. (It was no mistake McLaughlin was attached to all three of those efforts.) But none of that output captured the spirit like the Mahavishnu Orchestra's 1971 recording The Inner Mounting Flame.

The Inner Mounting Flame 's ascending and descending distortion-laden mantra-like riffs and unison playing set a standard for jazz-rock that is still in place today. Its Indian influences merged with blues scales and rock rawness set the music world on fire. The musical attack was relentless.

Over thirty years after its release, this album can still blow away first time listeners. The Inner Mounting Flame was recorded before the use of synthesizers, drum machines, and computer enhancement. The sound is loud, raw, and dangerous. Wild abandon meets supreme musicianship on such classic tunes as "The Meeting of the Spirits," in which an introductory guitar passage sounds like an electric sitar played through a thick fog. A forbidding theme turns "The Dance of Maya" into a raving jazz-fusion hoedown. The drummer and bassist take a short rest while the acoustic guitar, piano and violin offer the beauty, grace and delicacy of "A Lotus On Irish Streams". How could this be the same band that just blew out my eardrums?

Melodies and rhythms like had never been heard before. The distortion and the loudness could be insulting, and the speed of the playing was mind-numbing. In short, this was the greatest jazz-fusion recording ever made.

Who were these guys anyway? John McLaughlin was an up and coming European jazz guitarist who recently had been best known for some far-out playing with Miles. Soon he would become a guitar god. Billy Cobham was an ex-marching band drummer from Panama who had played with the great Horace Silver and in the important band Dreams. He too would also take his rightful place in the heavens. Jan Hammer was a true innovator who would eventually achieve worldwide fame not only for his keyboard playing, but also for his movie and television scoring. Jerry Goodman was a jazz-folk violinist who had cut his teeth during the short run of the pseudo jazz-rock group The Flock. Rick Laird had been a musician friend John knew from London. He was the house bassist at Ronnie Scott's jazz club and had played with Ben Webster and Wes Montgomery. Although the Mahavishnu Orchestra enjoyed a relatively short reign, their influence still reverberates today.

In 1972, the relatively unknown Mahavishnu Orchestra followed Count Basie at the Newport Jazz Festival. Upon hearing the very first ear splitting notes from the stage, hundreds of jazz fans—feeling musically assaulted - left the concert hall in a rush. What a joy it must have been!

Meeting of the Spirits; Dawn; The Noonward Race; A Lotus On Irish Streams; Vital Transformation; The Dance of Maya; You Know You Know; Awakening