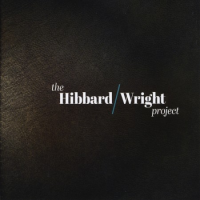 Atlanta-based Grammy Award- winning saxophonist Mace Hibbard has been leading and recording with a formidable quintet for the past ten years while over that same period, Roswell, GA-based guitarist Trey Wright has led the 4-piece Athens/Atlanta-based Squat jazz band and is now leader of his own trio. What they both have in common is a creative rhythm section of bassist Marc Miller and drummer Marlon Patton. On the self-titled The Hibbard/Wright Project, both men leave their respective groups behind and join forces with the rhythm section they share, forming an all new quartet for this outing. In crafting this debut venture, the co-leaders contribute fresh new original compositions producing music that does not quite qualify as your standard straight ahead material but rather, music that can be best described as well-played tastefully improvised modern jazz.

The modern grooves start humbly enough with the opening "Perseverance" as light rolling riffs off Wright's guitar are met slowly by Hibbard's penetrating saxophone voice in what is essentially a down tempo melancholy opening number. On the following Hibbard original "Lost," the band becomes introspective almost "lost" at times but this is most likely due to improvised runs from the leaders on the most ambitious and spacious number of the set attesting to the modern nature of the piece. The music is just as challenging and engaging on drummer Patton's only compositional contribution "Breach" featuring expansive solos from Wright.

The group turns on the charm on the more melodic "New Beginning" featuring Hibbard at his best with the high-end saxophone voice that pronounces the song and marks this "beginning," quite enticing. Bassist Miller also weighs in on the number with one of his solo moments as Patton's crashing cymbal accents dot the piece. Patton also provides some impressive solo moments of his own on such tunes as "All The Little Things," making sure that every member of this new quartet has a spot in the limelight. There's little melody to be found on "The Cure" but, the band makes the music as vibrant and compelling to hear as the last piece, and the inappropriately titled "The Unknown Conclusion," belies the obvious which is, that The Hibbard / Wright Project is, without a doubt, a conclusively positive debut performance from one of the emerging premiere quartets on the scene today.