By Gareth Thompson
October 23, 2018
Sign in to view read count 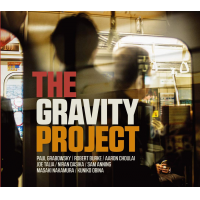 Born in Osaka, Japan, the veteran costume designer Junko Koshino has thrived on opposing images. Be-tentacled alien women can be expected to appear next to Greek goddesses in her shows. Her philosophy has thus been described as taikyoku, the Japanese word for "extreme opposites."

Here comes the relevant bit... Now consider Masaki Nakamura, a young star of the shakuhachi (Japanese bamboo-flute) who has performed at Koshino's fashion shows but also in castles, shrines and temples. More extreme opposites, indeed. So, maybe no surprise that severe contrasts enticed him to join The Gravity Project, an album fashioned by Australian jazz heroes Paul Grabowsky and Robert Burke. A bid to merge Oceanic and Oriental influences with hip-hop and electronica, it premiered at the Melbourne International Jazz Festival in 2018.

Such a weight of different ideals might cause any project like this to buckle. But immediate worries of overkill are dispelled on opening "Tokyo Overpass," where the tone is pared down and suggestive, like a haiku. Kuniko Obina plucks the bare bones of sound from a koto (a Japanese zither with silk strings), using notes as fragile as papery petals. Worldly concerns might almost be abandoned here, joined by Burke's unhurried sax and a shadowy bass.

"Beat Hayashi" then builds by nuances into a full fruition of the album's various parts. Electronic hooting invites a creamy sax/trumpet duet over an eddy of digi-beats. The shakuhachi floats in under a tempest of explicit rapping, leading towards a drum solo of such primal fury it sounds like thunder in a mountain crag. The soul twists and turns under this track's onslaught, but the whole mosaic feels a little too cracked and forced by the end.

More pointed rapping on "Plum Rain" drifts away into an electronic sphere, where sax notes shimmer like silk flags. Raunchy raps with the vehemence of swordplay then pierce "Now Breathe In," over turbulent beats and keys.

A welcome flowering of the koto marks "Vinegar" amid fitful improvs, until "Psalm" at last brings the shakuhachi into solo bloom. Nakamura creates a real stillness of space here, like an austere ritual, not clouded too much by tranquil electronics and the ensemble's serene playing.

The Gravity Project is never quite the Zen jazz garden it might have been, but more a library of social realism and mythology. Yet gravity itself has an infinite range, and the pull of this forceful album may be felt long after leaving its orbit.