By LAWRENCE PERYER
November 12, 2011
Sign in to view read count 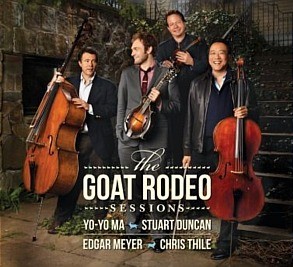 The Goat Rodeo Sessions is the perhaps not-so-unlikely collaboration between mandolinist Chris Thile, bassist Edgar Meyer, fiddle player Stuart Duncan and ubiquitous cellist Yo-Yo Ma. These four master musicians have together made some of the most lyrical and captivating music of 2011.

As expected, the playing is superlative. The compositions were born of group improvisations but, while each musician is given ample room to shine, it is when they are truly playing together that the real drama unfolds. These are world-class musicians in a novel setting recorded in a pristine fashion. The resulting record is lush and warm, a perfect accompaniment for the twilight of autumn.

This is explicitly American music, by way of Appalachia and New England. Because of the instrumentation and inclinations of the majority of the players, there is certainly a heavy bluegrass/newgrass vibe, but hardly a predominant one. Many of the compositions are well within the tradition of composer Charles Ives, especially in the use of polyrhythms and even aleatory passages. In fact, the element of chance is recognized most explicitly in the album title. The liner notes quote the estimable Urban Dictionary website, which defines a "goat rodeo" as "a situation that order cannot be brought to any time," and also "about the most polite term used by aviation people (and others in higher risk situations) to describe a scenario that requires about 100 things to go right at once if you intend to walk away from it." While a melodically heavy, resonating album, this spirit of playfulness certainly manifests in the playing and surfaces in song titles like "Where's My Bow" and "Less is Moi."

While not the focal point in any explicit way it is impossible to diminish the presence of Ma. His expressive bow work brings a haunting melancholy that connects this music to its ancient, primordial roots, befitting a French-born, Chinese-American man whose family lineage can be traced to the thirteenth century Song Dynasty. While not credited with any of the compositions, this is much a Ma record as any of the others.

If a driving force behind this record had to be picked, though, that would have to be Thile. All of thirty years old when this album was recorded in the summer of 2011, Thile has already forged plenty of ground as the writer and player in his groups Nickel Creek and the Punch Brothers as well as in a variety of solo, guest and collaborative settings. While he performs largely in the bluegrass idiom, his compositions increasingly take the form of suites and concertos. All of the players, in fact, bring great skill, context and experience to the project.

This record rewards repeated listening in a variety of settings. There is much to be felt inside a pair of ear buds but the fidelity and strength of performance are well-suited to fill a room as well. The Goat Rodeo Sessions is a transporting, timeless yet tastefully contemporary record.

Attaboy; Quarter Chicken Dark; Helping Hand; Where's My Bow; Here and Heaven; Franz and the Eagle; Less is Moi; Hill Justice; No One But You; 13:8; Goat Rodeo.