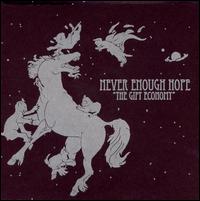 The Gift Economy is a showcase for Summerfield's compositions. His music has the idiosyncrasy and ambition of Frank Zappa coupled with the disparate elements and brutality of John Zorn's Naked City. There are hints of minimalism, free jazz, rock balladry, psychedelic freak-outs, afro-pop, etc. It's a physically powerful recording. Often disturbingly so. But although occasionally intriguing, the results are mainly uneven.

"The Banner" opens with dreamy, atonal strings floating through improvised drumming and vibraphones. There's a balance here (and throughout) between improvisation and composition. When the atmosphere is lighter, this balance works to Summerfield's advantage. "Des Moines" is also introduced with a section featuring the strings and the drummers—this time using a gentle, repeating pizzicato figure with soft beaters playfully making time beneath them. This tune features the recording's most memorable melody. But as forms build, shifts in mood and dynamics are often abrupt and chaotic making much of the music difficult to digest.

It's no coincidence an earlier Summerfield project was called Crush Kill Destroy. The Gift Economy is like a tale of two cities... at war. Or a tale of two buildings floating in space on a collision course. Summerfield erects dense harmonies or static grooves—often rhythmically hip and danceable ones—only to abruptly erect another, often seemingly unrelated, more brutal sound to overwhelm the prior. Occasionally there's an interesting kaleidoscopic effect from this practice and the inclusion of strings sometimes adds a shimmering quality. But more often, instead of these buildings colliding to form new and modernistic Guggenheim-like structures, they simply collapse into rubble.

There's also an issue with the group's balance sometimes coming off as bottom heavy. Two basses, a baritone saxophone and a bass saxophone all playing in their lower registers can be a useful effect. It can also result in an overpowering, harmonically muddled mess. Summerfield is well aware of this and uses it to add to his density. It seems the object of certain sections is to create ambiguous, loud, churning masses of clashing dissonance that create a moil in the pit of one's stomach. As a rare shock, this is effective. But as a regular and prolonged focus, it becomes tiresome.

The last track, "A Gift," has the recording's only vocal. Though uncredited, it can be assumed Summerfield is singing. His range and style are reminiscent of a tune from the film Zero Effect (1998) by Nick Cave, in subdued mode. In fact, Summerfield's lyrics could've been written by the film's title character. Because of its directness and heart, and despite its stylistic difference, this pop ballad is the CD's most affecting track.

The Banner; Des Moines; Two Ghosts At The Table; Grant Park; The Light Tilts Out; A Gift.