Fourth Page: The Forest from Above 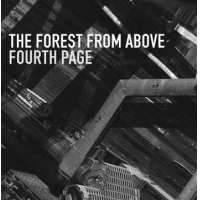 It is a pleasure to welcome this new album by the quartet Fourth Page. After a flurry of activity in 2011, during which they released three albums, including their previous Leo recording, Blind Horizons, the group stayed together until 2013. Following a four-year break to work on other projects (during which guitarist-vocalist Charlie Beresford and pianist Carolyn Hume recorded with classically-trained cellist Sonia Hammond), the original foursome, with bassist Peter Marsh and drummer Paul May, reunited and recorded this album in May 2017.

Compared to their playing before the break, the quartet now sounds more plugged in, employing electric guitar and bass, with occasional electronics, a welcome evolution that subtly enhances the music. Across six tracks, ranging in length from four-and-a-half-minutes to fourteen-and-a-half, the foursome improvise pieces over which Beresford sings improvised lyrics. Miraculously, they seem to be able to do this without repeating themselves or obviously drawing on a library of stock phrases. No one of the four consistently steers the others, and any of them can take the lead at any time. The time and experience that the four have had together has given them an all-too-obvious trust in one another, so their music flows naturally and organically.

In the past, the results have drawn comparisons with an eclectic range of music including Schubert song cycles, David Sylvian and John Martyn; inexplicably, Scott Walker or Astral Weeks-era Van Morrison have never been mentioned, but ought to have been. For lovers of song who are dubious about the merits of improvised music, Fourth Page could prove an ideal gateway into the wonderful world of improv—likewise, for improv fans who fight shy of popular song. In fact, it is difficult to imagine who this quartet would not appeal to...

Cold of the Night; Sundial; Back of the Line; Through the Lens; Come Out of the Shade; Turn the Tide.