Home » Jazz Articles » Steve Lacy: The Forest and the Zoo

Steve Lacy: The Forest and the Zoo 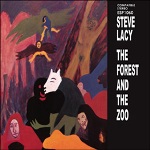 Soprano saxophonist Steve Lacy's impressive career was filled with many benchmarks, but 1966's The Forest and the Zoo is surely one of his strongest. Having corrected the erroneous phasing on the original release of the album, this reissue sees the two side-long quartet works sounding better than ever.

Playing no small part in the elastic excitement of these excursions is the able work of Lacy's sidemen. Comprised of an international body of musicians including Italian trumpeter Enrico Rava and the South African rhythm section of bassist Johnny Dyani and drummer Louis T. Moholo, the unit brings a fiercely diverse field of influence to the close working methods explored on these taut improvisatory workouts. Having already played together in The Blue Notes and Brotherhood of Breath, Dyani and Moholo were well versed in each others' style, and slip easily into the sound of Lacy and Rava's front line. That the album is a document of a live performance in Argentina only adds to the worldly nature surrounding the recording.

Broken into two thematic extrapolations, the work functions in a similar manner as Don Cherry's Complete Communion (Blue Note, 1965) effort from a year earlier. The unit displays its impressive capabilities immediately on "Forest," taking off from the lilting theme to explore realms far afield from its starting point. The rhythm section's buoyant support gives Lacy and Rava ample room to sprawl out, interweaving lines with a joyful playfulness not often associated with music so sporadically created.

"Zoo" explores similar territory, applying the same format and approach to a different, more moody theme. Still, the music retains its airy energy, even as it takes off into a more kinetically based freedom. Having fully hit their stride at this point, Lacy's sax squeals around Rava's babbling trumpet while Moholo and Dyani careen around them with abandon. Yet even with this kind of energy, the group never loses any of its fluidity, instantly reacting to one another as the work takes on a shape far beyond the confines of its theme.

While Lacy's work is already well renowned, The Forest and the Zoo is a fine opportunity to hear him and one his strongest ensembles playing at the top of their game. Rather than the liberating spirituality sought after in so much free jazz Lacy's unit remains light-hearted and whimsical, even as it soars above the ground below.