The Energy Is One: An Interview with Hiromi Uehara

There are so many great piano trios in the history of jazz. It offers such simple instrumentation, but the orchestral possibilities are so profound.

All About Jazz: Your earliest musical studies were at the Yamaha School of Music. Please describe your experience there. Was this in Tokyo?

Hiromi Uehara: It was in Shizuoka, where my home was. I first attended this school when I was five years old. I also attended a regular elementary school, and I was taking piano lessons with a local teacher. I began to study composition at the Yamaha school. And I continued to study there until the age of 15.

AAJ: How did you decide to study piano?

HU: My mom really wanted to study piano when she was a kid, but she wasn't able to take lessons. So that is why she wanted me to do this, and she brought me to the piano lessons.

AAJ: Have you studied other instruments besides the piano?

AAJ: Well, the piano can sound like a whole orchestra.

AAJ: How did you first encounter jazz?

HU: It was through my first piano teacher. She loved jazz so much. She had so many LPs of jazz music'Errol Garner was one of her favorites. She was a pure classical teacher, but at the same time, she loved jazz. She helped me to listen to an Errol Garner album when I was eight years old. Obviously, I showed so much interest in the music that she asked me if I wanted to begin to improvise. So she had me improvise on classical pieces'by Mozart, Haydn. Then I started to just play around with classical music on my own, improvising on the tunes. That's how I got into jazz music. Then I started to explore more jazz LPs, in my teacher's collection.

AAJ: When you were young, did you think that jazz was a popular music in Japan?

HU: No, I don't think so. Well, it was really popular in my world! Because my teacher loved it so much, and I got that from her.

AAJ: Were you aware of Japanese jazz artists as you became interested in the music?

HU: I started to listen to Japanese jazz musicians when I went to high school. Some people I listened to were Yosuke Yamashita, Toshiko Akiyoshi, Sadao Watanabe.

AAJ: Do you think of jazz as popular in Japan now?

HU: I think the mainstream music in Japan now is pop music. Japanese pop. Do you know enka? It is the old, traditional style of Japanese music. The singers dress in kimonos and this is still popular. But I think jazz musicians are trying so hard to open the doors for young people to listen to something different in music. I listened to a lot of jazz on TV commercials in Japan. But among jazz styles, I think Japanese people still like the older, more traditional styles of jazz. Music of the swing era. And the bebop era.

AAJ: How did you decide to come to the States to study at Berklee?

HU: I wanted to study orchestration and arranging more.

AAJ: Were you encouraged by your teachers in Japan to go to Berklee?

HU: No. Actually, I was playing jingles for commercials on TV when I was in Japan, for two years. I started to get involved in orchestration, and I began to realize how deep it can go. I realized that I need to study this more. And, I really wanted to come to the States, from a very early age. I really loved jazz, and jazz is from the States. I wanted to come to the place where jazz was born. I thought the timing was right for me to come.

AAJ: When I interviewed Gary Burton from Berklee, we talked about how many Japanese students attend Berklee.

HU: And how many?

AAJ: He said about 10% of the student body comes from Japan. About 300 students. In your experience, do the Japanese students there hang out together, or do they pursue friendships with students from all over?

AAJ: When you were at Berklee, did this give you opportunities to play in public'in clubs? Were you able to make good contacts?

HU: Being there gave me the chance to make a contact with Ahmad, Ahmad Jamal. Meeting him was the greatest, biggest opportunity for me. But I also met so many amazing musicians at Berklee, including my teachers, and other students. For example, my drummer is a teacher at Berklee. Also, at Berklee I was able to get gigs playing in piano bars, playing at weddings.

AAJ: You mentioned Ahmad Jamal, and you have also met and played with Oscar Peterson and Chick Corea. All outstanding pianists. Do you feel inspiration from other instrumentalists too?

HU: I love guitarists. The guitar is a favorite instrument of mine.

AAJ: Have you met Pat Metheny?

HU: No. But he's, like, my hero! I really like his music. I've listened to his new solo album.

AAJ: In your liner notes to your CD, you describe the inspiration you get from other musicians as a kind of energy. You also mentioned that you are inspired by great athletes, such as Michael Jordan. Do you include Japanese baseball players?

HU: Yes, yes, of course. I love Ichiro. I think it's very encouraging that more Japanese ballplayers are playing in the States now.

AAJ: Can you tell me more about the energy of inspiration?

HU: Take Michael Jordan, for example. When he shoots, when he goes up, when he jumps and is in the air, everyone is with him'there is so much concentration, everyone is amazed, and happy, and feel as if they are flying too. In the whole gym, the energy is one. The crowd is one. It's a most amazing, beautiful thing.

AAJ: And music can be this kind of energy, this unifying force.

AAJ: On Another Mind, your new CD, you perform your own compositions exclusively. Can you tell me about your writing process?

AAJ: In composing, are you at all aware of the influence of Japanese musical traditions? Sources, anything that you might be responding to?

HU: I've never really thought about that when I write. But I'm sure, on some level, that this is present somehow. I'm sure that I must be influenced by so much Japanese folk music because I grew up listening to that and that's where I came from. But the influence is not a conscious one.

AAJ: On Another Mind, the trio of piano, bass, and drums is the core unit, as in much of jazz. What do you think are the expressive possibilities of the trio format? 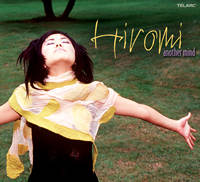 HU: What I love about the trio format is its rich history. There are so many great trios in the history of jazz. It offers such simple instrumentation, but the orchestral possibilities are so profound. I'm really interested in how I can use each instrument, and there are just so many possiblities.

AAJ: And the musicians can really listen to one another too.

HU: The interplay is incredible.

AAJ: To me, at least, in listening to your CD, I sensed a lot of attention to the order of the pieces'the whole emerges a little like a novel, or play. Did you think much about this?

HU: Oh, I talked about this so much with my producer. I had so many of my own ideas, but she had her ideas too, and we talked about them. We discussed this so much, and it took a long while. This is something I look for and study in the music I listen to. The creation of a unified effect, an atmosphere, is so important.

AAJ: What lies ahead for you now?

HU: I'll be touring a lot now. There were several dates on the east coast during June, and then I'll be playing in the Midwest. Chicago. And after that, on the west coast, California. Later in the summer there's a date at Tanglewood. The tour continues in September, and then in October, I'll be going to Europe. Sometime I would love to go to South America too, but there are no plans now.

AAJ: Will you be touring in Japan too?

HU: I did a small tour there early in June. Only two places, Tokyo and Shizuoka, my hometown. My parents live in Shizuoka, so that is still my home. Right now I have no idea if I'll return to live in Japan permanently. At this time I would like to continue to stay in the States as much as I can. I meet so many amazing musicians here. I really like the creative atmopshere. I like the food in Japan better, but I'll be staying in the States for now.

AAJ: I know that someday you would like to write an extended piece, a piano concerto. Do you think this is something you'll do soon?