By GLENN ASTARITA
December 9, 2018
Sign in to view read count 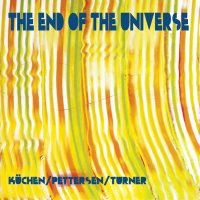 It may be a matter of semantics, but does the album title imply the physical end to the universe where all matter is extinguished, or is the trio at the edge of the universe and framing their collective improvisational skills on that notion? Either way, the music iterated here musters a cosmic reference point for these experimental gurus, performing together for the first time.

Saxophonist Martin Kuchen (Sweden), guitarist Ed Pettersen (USA) and drummer/percussionist Roger Turner (UK) possess distinctive discographies, mainly centered within the outside scheme of things: free jazz, spontaneous compositions, progressive jazz and other art- forms. However, Pettersen is a relatively new arrival and has proven to be a cunning and highly imaginative idea-man.

The artists dish out a rather chilling spin on the extrapolations and tangents of our universe. With Pettersen's rangy, extended notes slicing or streaming through Küchen's multi-purposed and fragmented lines and Turner's inventive asymmetrical percussion schematics, the band seemingly traverses black hole stars amid textural backdrops and otherworldly exchanges. At times the saxophonist uses objects to slant his sax sound, where micro- patterns liquefy on the spot or simply get lost in a timeless void whenever they raise the pitch or moderate their very busy, but productive improvisations.

You can almost detect the spaceship engines revving on "Voyager." Moving forward, Küchen's prickly phrasings, a little roughhousing, and screeching upper-register plaintive cries are shaded by Turner's resonating cymbals and small percussion enactments. But the saxophonist's devastating attack yields a foreboding sequence of events atop the guitarist's dark-toned and silky voicings.

On "The End of the Universe" Turner's scrappy and jingling percussion could signify the initial meeting with a higher lifeform, along with the saxophonist's blurting narratives and electronics-based crunching noises. Moreover, the trio advances the motif with fervent choruses via a turbulent passage as the music drifts into the Alpha Centauri star system or somewhere in that neck of the woods. Indeed, the musicians graciously beam down this spine-tingling intergalactic soundscape to your private listening space, allowing for repeated trips into parts unknown.

.As Far As Your Can Hear; Voyager; Far Out; The End of the Universe; Gone (bonus track).