Julia Hulsmann Trio: The End Of A Summer 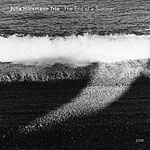 Why do some artists achieve popularity in their own country and fail to make an impression elsewhere, while others cross that boundary with apparent ease? It's easy to argue that there's an "X" factor involved, a singular and identifiable something that allows an Esbjorn Svensson to attain international stature while pianist Julia Hulsmann, with a trio nearly as old as the late Svensson's heralded e.s.t., hasn't managed to break out of her native Germany.

Differentiation is key; equally, exposure is a factor. e.s.t. landed a strong break with its two-album Columbia deal in North America, spending some serious road time in Europe, Canada, and the United States. While three of Hulsmann's first four discs are on the not insignificant German ACT label, they didn't receive the same kind of international push. The End of A Summer, the pianist's first pure trio disc since the indie Trio (BIT, 2003), benefits not only from its wider reach, but from the brand loyalty ECM has built over the past four decades. That The End Of A Summer is deserving of that loyalty only makes Hulsmann and her twelve year-old trio all the more overdue a discovery.

Hulsmann has, in the past, demonstrated a pop sensibility not unlike Svensson's, enlisting singers to interpret pop music by Randy Newman, Nick Drake, and Sting, as well as the oblique poetry of e.e. cummings and the fatalistic Emily Dickinson, supported by Hulsmann's own music. Here, stripped down to its essentials—bassist Marc Muelbauer and drummer Heinrich Kobberling—Hulsmann's trio continues to largely work in song-like miniature, with the disc's ten tracks rarely cracking the five minute mark. Lyricism and introspection define the set, although the trio isn't averse to bursts of energy on Hulsmann's spry "Quint" and more dramatic yet still sparsely populated "Geld," where Muelbauer's pedal point allows the pianist to wax modal, even as the occasional injection of changes lends it more definitive form.

The chemistry is deep and the approach democratic. Muellbauer's robust bass is a melodic partner to Hulsmann's gentle but confident touch on Kobberling's "Where In The World" where the trio subtly stretches and contracts time, underscoring its unshakable forward motion with an understated tension and release. On Hulsmann's more pensive title track and Muellbauer's deceptively idiosyncratic and implicitly swinging "Last One Out," the trio combines generous use of space with thoughtful melodies—at times, near-singable but elsewhere more curious and opaque. Hulsmann demonstrates elegant simplicity and respectful reverence on a tender rework of the Seal hit "Kiss From A Rose" and her own "Senza," adding blue shades to her lengthy solo on the loosely swinging "Not The End Of The World."

Avoiding blatant virtuosity, The End Of A Summer engages, instead, on a deeper, more subconscious level. Profoundly beautiful and possessing a telepathic interaction that can only come from years playing together, this may not be the Julia Hulsmann Trio's debut, but it will be a first encounter for many, and a fine one it is.

The End Of A Summer; Konbwa; Kiss From A Rose; Last One Out; Quint; Senza; Not The End Of The World; Sepia; Geld; Where In The World.