Jangeun Bae: The End And Everything After 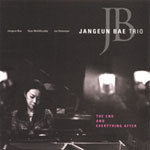 As a means of comparison only, the music of pianist Jangeun Bae is altogether more abstract than that of Chie Imaizumi or Min Rager. The latter two are very extroverted and up front about the emotions being expressed, while Bae is almost reticent in comparison, but with an intensity that burns beneath it all.

The observation that female musicians seem to be an optimistic group is not limited to Asian women, since Romona Borthwick and Tara Davidson exude it also. To be sure each puts her own spin on the optimistic, but, once hearing the connection, it is hard to deny it is there.

Bae is the most serious sounding of the group and yet has a romantic streak just beneath the surface. Serious here does not mean, of course, taking the music seriously, but rather the air of mystery combined with using small rather than large gestures as building blocks. The arrangements are full of drama and make full use of the trio's interplay to create emotional waves.

When Bae is improvising, she spins long lines made up of cells that are varied in many different ways both melodically and rhythmically, and then tied together to create a delicate yet strong net in which an attentive ear will bask. The effect of these piano lines is seductive and reinforced by bassist Ryan McGillicuddy and drummer Jon Deitemyer as they remain ever aware of Bae's twists and turns.

While every track has its own charms, the album's pacing creates its high point within the center third: "Donauquelle: The End and Everything After, Rachmaninov's "The Theme of Paganini" and "After He Has Gone."

"Donauquelle" is a German word meaning the "source of the Danube," and there is a monument built at the spot in southwest Germany. Juxtaposing this word with the phrase "the end and everything after," which has an oppositional meaning, is telling. Bae plays solo and this track is the most transparently romantic and emotional on the record.

"Paganini" begins with echoes of Ahmad Jamal, especially in Deitemyer's cymbal work, which brings to mind Vernel Fournier from Jamal's early trio, and has a dramatic slow section near the middle. Sadness quickly evolves to resoluteness as "After He Has Gone" progresses.

The most interesting thing about The End and Everything After is the ease with which all the deep structure and detail are wrapped within very accessible music. Even (or maybe especially) on the standard, "You Don't Know What Love Is," a casual listener will find much beauty and consonance, while a close listener will continue to uncover more and more as the layers are dissected and peeled away, which is a most pleasant undertaking.

Liberation Amalgamation; Secret Place; My Mother's House; Donauquelle: The End and Everything After; The Theme of Paganini; After He Has Gone; I am a Poor Wayfaring Stranger and Korean Folk Song; Procrastination; You Don't Know What Love Is.

Title: The End And Everything After | Year Released: 2007 | Record Label: Kang Music