The Eclectic Sounds of ears&eyes

By JAKOB BAEKGAARD
March 27, 2018
Sign in to view read count
Whereas some record labels try to limit their aesthetic to a certain sound, others take pride in challenging the conventions of genre. Matthew Golombisky, the founder of ears&eyes Records, belongs to the latter category. His philosophy is very clear, as he points out in the label profile that can be read on this site: "My motto has always been that I release great music. Period. It has to be fresh, interesting, intriguing and sincere. My goal is to continue to release, what I believe, to be incredibly awesome music. Most of the releases come from a jazz/creative music mentality, but we're not limited to only jazz-type music. We have a handful of pop, rock/soul, folk, and electronic releases as well."

Here is a handful of releases from ears&eyes Records. They all underline Matthew Golombisky's eclectic taste in music. 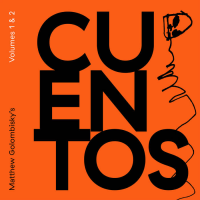 Golombisky's open approach to releasing music is reflected in his own work as a musician. Each new record seems to be another story and his album of Cuentos: Volumes 1 & 2 reflects this. Cuento means short story and the musical stories are related to geography. One section is tied to Oakland and the other section is connected to Chicago. The pieces reflect musical friendships developed at these places, but, more importantly, Golombisky creates his own genre, which is described beautifully by guitarist Phil Schurger in a note to the album:

"The compositional structures are meant to be simple, and showcase the improvisational precision of each performer, conveying a modest concept with fluidity, clarity, and focus. Even the lengths of the pieces represent a conceptual modesty. Most pieces range from almost-three minutes to five minutes in length; single ideas presented, explored, and left to the listener for reflection. The Cuentos are here and gone before a single musician is able to explore every possibility of the story. The mood of each piece can vary, but usually remains with one singular musical gesture, goal, or feel. In this way, they humbly encourage that the music stays within the realm of a short story format, and doesn't develop into a full novel."

Especially the first section (tracks 1-6) delicately uses the textures of cello and vibraphone while Aram Shelton's saxophone moans softly to a bass guitar riff on "Cuento #5." The other section (tracks 7-12) introduces guitarist Bill MacKay and another bassist, Jeff Greene, and not least the lyrical voice of James Davis' trumpet that gently punctuates the air on "Cuento #8" where there is also a dialog between Golombisky and Greene on the electric and acoustic bass. Overall, this is melodic, minimalistic and enchanting chamber jazz. The French composer Erik Satie would have liked the simple complexity of this music. 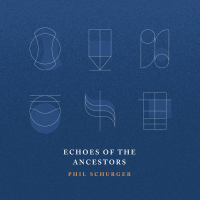 Phil Schurger accurately described the Cuentos as "conceptual modesty," but on his own Echoes of the Ancestors, he stretches out with epic compositions that move between different states. Deep grooves and luminescent melodies emerge in compositions that seem to stand still in the eye of a storm. In other words, they are both dynamic and reflective. Schurger's playing is stringent, so even when he plays fast unison lines with saxophonist Greg Ward, he does so with calmness and clarity without succumbing to empty pyrotechnics.

Schurger practices mediation and his extended liner notes for the album can be found on his website: https://www.philschurger.com/new- blog/2017/9/13/echoes-of-the-ancestors-insights-and-inspiration. Here are his thoughts on the closing track "The Tower":

"The composition, the Tower, is structurally built like a Tower. The melody is built off of descending quartal triads woven together to form the tapestry for the woven lines. The melodic lines are interwoven and move circularly around the axis of the harmonic structure. Figuratively speaking, playing the virtuosic structure of the melodic line is like the Hermetic idea of the personality of an aspirant scaling the walls of a tower brick by brick to attain the vantage point of the Individuality, the higher self. Having elevated the being, the lower Personality is given a heightened sense of perspective. This is the experience of merging the sefiroth Hod (intellect) and Netzach (intuition) upon the 27th path of the Tree of Life, the path of the Tower."

The metaphor of building is also very apt when it comes to the album as a whole. Together with bassist Greene, drummer Clif Wallace and saxophonist Ward, Schurger builds a complex tapestry of melodies and sounds that echo the people that have meant something to him, including his own father. Schurger does not try to create art out of nothing, but instead aims to find the connection to the past while making music in the present. 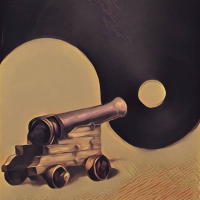 From the minimalistic beauty of the Cuentos to the extended journey of Schurger's compositions, there is yet another stylistic leap with Cannonball Porch, the second album on ears&eyes Records by Hood Smoke.

Once again, the Chicago band led by bassist and singer Bryan Doherty delivers its own brand of sophisticated pop music, incorporating everything from bombastic rock guitars on "Feel Lost" and soft acoustic funk with keyboard, wah-wah, slide guitar and saxophone on "Crackerjack." On the other hand, "Easy to Obsess" is very calm before breaking out into a dramatic part with thundering drums, only to disappear slowly into silence at last.

Throughout, the sound is mostly seductively silky, and it is hard not to be carried away by the pure elegance of the music. The opening triptych of "Storybook," "Porcelain Flowers" and "Blue Janie" are immediate highlights and the band is best without the dramatic contrasts and expressive rock clichés of "Feel Lost." Instead, the strength of this record is precisely that it does not have to shout to get the message across. Countless tropes from popular music melt into the aesthetic of the band, but especially the seventies seem to be a musical decade that Doherty likes. However, Hood Smoke is not a nostalgic construction, but a modern band with a contemporary, organic sound. It is soft rock for a new century. 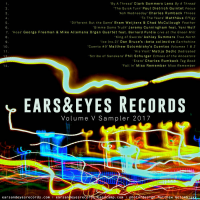 One of the best ways to keep up with the many new sounds on ears&eyes is by consulting the various samplers compiled by Matthew Golombisky. Each sampler gives a good idea of the diversity of the label, but the sampler also works as a narrative that moves from one highlight to another.

The latest entry is Volume V and it is clear that 2017 was a very good year for ears&eyes. Schuler and Golombisky both turn up with tracks, but there are also gems from Charles Rumback's superb trio, a funky track from George Freeman and Mike Allemana featuring the iconic drummer Bernard Purdie and a charming oddity like Jeremy Cunningham's protest song "Gimme Some Truth."

All in all, the sampler underlines the importance of ears&eyes Records, a label that keeps on pushing forward with great music that refuses to be limited by generic thinking, but still seems firmly rooted in jazz in all its different shapes, shades and sizes.

Echoes of the Ancestors

Tracks: Storybook; Porcelain Flowers; Blue Janie; Seneca Lake; El Salvador; Feel Lost; Crackerjack; Easy to Obsess (So Much of One); Depending on The Fool; Off Clouds.

Tracks: By A Thread; The Quick Turn; Ash Wednesday; To the Years; Different but the Same; Gimme Some Truth; Hoss; King of Swords; Ice (no. 2); Cuento #9; His Visit; Scribe of Sanskara; Erato; Fall In.