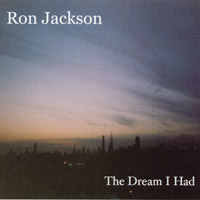 Jackson takes full advantage of this diverse musical experience on his third release, The Dream I Had, a well-balanced, well-executed album of original compositions and covers. His trio with bassist Joris Teepe and drummer Joris Dudli maintains a cohesive, swinging feel throughout. Teepe’s bass lines and staunch rhythmic support stand out on many of the numbers as particularly compelling.

Though the heart of Ron Jackson’s album is the rhythmic solidity developed by Teepe and Dudli, several of his compositions deserve attention. The title track has a penetrating melody and rhythmic pull that works its way deep into the ear and is marked by a certain emotionally narrative quality that some of the other pieces lack. “To Mr. Evans” is also an accomplished piece both as a composition and as vehicle for some of Jackson’s more inspired improvisation. Here Teepe’s solo playing exhibits particular depth.

The slower tempo-ed “You” is also quite moving, and Teele’s playing reveals the powerful emotional content the composition contains, as well as its potential for moving improvisations. Unfortunately, Jackson’s playing falls short here and there, at times skating on the surface of the material, and at others extracting great feeling. The shame lies in the fact that these occasional missteps distract from the balance of the composition, a strong arrangement, and Teele’s already mentioned performance.

A third highlight is Jackson and crew’s take on Stevie Wonder’s “Too High.” The funky beat, hard- hitting bass, and well-placed guitar work unite on this album's most upbeat and entertaining track. Dudli’s drumming provides the essential element here, with Teele following his lead with just the right thickness of tone.

Unfortunately, some of the less satisfying pieces lack this distinctive color. Jackson’s linear, impeccably precise lines might benefit from more adventurous development and a greater chromatic exploration. This would imbue his almost too-precise phrasing with the deeper value it sometimes misses. Jackson shines most when you can feel him fully engaged with the material, as on “You” and perhaps even more so in the cheerful “Too High.” The album's unevenness provokes interesting riddles on the nature of interpretation, since most of the songs presented are Jackson’s own compositions.

Still, despite this uneven quality, The Dream I Had should appeal to most guitar trio fans. Moreover, individual pieces show just how good these musicians are as individual players, and it would be interesting to hear them work as a unit again, either taking on new material, or even returning for a second effort with some of Jackson’s strongest compositions.