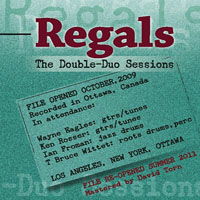 It's been six years since guitarist Wayne Eagles released Milligan-Eagles Project (TetraArtist, 2005), a groove-heavy record that also featured Canadian bassist Mike Milligan and drummer Billy Kilson. Looking to try something a little different this time, the Ottawa, Canada-based musician turns to drummer T. Bruce Wittet—a long-time fixture on the Ottawa scene and an intuitive player with particular attention to tone—for one-half of the titular The Double Duo Sessions. The second half goes Los Angeles-based guitarist Ken Rosser (Smokey Robinson, David Torn), and one Ottawa expat, drummer Ian Froman (Metalwood, Dave Liebman), currently residing in New York City, where he's a faculty member at Drummers Collective, New School University and City College of New York. The result is a loose session where a couple of originals are mixed with a preponderance of free improvs, in settings ranging from electro-centric to organic, and from full quartet to acoustic duo.

Context is everything, with both Rosser and Eagles drawing from a variety of influences, but if there's a single link between them, it's Torn, a guitarist whose experiments in color and sound are a significant touchstone for the quartet improvs, in particular the closing "Sonata Form At All," the group's most flat-out aggressive track. Both Rosser and Eagles process their guitars nearly beyond recognition, while Wittet and Froman create a turbulent maelstrom in, out and around them, gradually settling into a fiery pulse over which the two guitarists create otherworldly sonics and Jimi Hendrix-ian feedback, as the nine-minute piece fades to black. Hendrix is another marker, too; in particular on "JH al coda," another dense improv that touches on Experience-era Hendrix with a direct reference to the late psychedelic axe-master's near-sidelong epic, "1983... (A Mermaid I Should Turn to Be)," from Electric Ladyland (Reprise, 1968), as the song reaches its ultimate conclusion.

But it's not all electrified and searing; six miniatures, numerically named in Esperanto ("Unua" through "Sesa") act as diminutive respites, acoustic guitar duets that range from the rhythmically cross-purposed yet folksy "Sesa" to the more static, harmonic and slightly skewed "Kvina." "Kvara" is odder still, with tapped body and tapped strings creating an almost dulcimer-like texture, but a repetitive motif gradually emerges, which provides a brief foundation before dissolving back into the ether.

Of the three composed pieces (two by Eagles, one by Rosser), "BC-ing-ya" is the most touching—dedicated to another Ottawa drummer, Lorne Kelly, who passed away far too soon in 2009—form emerging from its rubato intro as a series of arpeggios redolent of guitarist John Abercrombie's title track to Timeless (ECM, 1975) but without the odd time signature, leading to a two-chord vamp driven by both Wittet and Froman that gives free rein to both guitarists.

Proof that there's life beyond the larger jazz meccas—that smaller music scenes can engender their own kind of creativity—geographic distance just might make The Double-Duo Sessions a one-shot deal. But it's great to see a group of players connected in a variety of ways come together for a date where friendship is the catalyst and spontaneity the charm.

Something Goes Wrong With The Silence; Unua; At Most, Spheric; Dua; Down Getup; Tria; BC-ing-ya (for Lorne Kelly); Kvara; JH al coda; Kvina; Eleventh Hourglass; Sesa; Sonata Form At All.