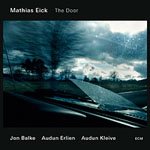 Not yet 30, Mathias Eick has racked up an impressive number of appearances on ECM, including guitarist Jacob Young's Evening Falls (2004) and Sideways (2008), drummer Manu Katché's Playground (2007) and pianist/harpist Iro Haarla's outstanding Northbound (2005). But that's only the tip of the iceberg, with the Norwegian trumpeter appearing on over fifty albums ranging from jazz to flat-out rock and roll. So while some musicians his age aren't yet ready to fly solo, Eick has more than paid his dues, a fact made abundantly clear on The Door.

Assembling a group familiar to fans of ECM and Norwegian labels including Jazzland and Rune Grammofon, Eick's debut as a leader is remarkable for its avoidance of technology, a defining aesthetic for so many of his musical peers. Audun Erlien may use an electric bass, and pianist Jon Balke augments his experimentation inside the body of the grand piano with occasional use of Fender Rhodes, but The Door avoids any kind of processing—real-time or post-production—and there's no sign of Pro Tools being used to doctor what is largely a live-in-the-studio (and, in many cases, first take) recording. Occasional guitar and vibraphone overdubs by Eick and Erlien are felt more than heard, while Farmers Market's Stian Carstensen expands the soundscape with some spare pedal steel on three tunes.

Eick's tone may be redolent of the timbre-stretching approaches of Nils Petter Molvær and Arve Henriksen, but it also displays a classical purity and a hint of Kenny Wheeler's melancholy lyricism, creating a voice that's become, in a very short time, as distinctly recognizable as his sources. Despite unmistakable chops, Eick's style has always been defined by a strong predilection for melody and, with The Door's eight self-penned compositions, he proves the aesthetic behind his playing is in equal force while composing. Whether it's the folkloric theme of the title track—a nod to influential saxophonist Jan Garbarek's purity in every note and sense of purpose in every phrase—or the hauntingly beautiful "Porvoo," which closes the album as a deceptively simple but evocative duet with Balke, Eick's music is all about exploring melody and its every possible nooks and crannies.

As lyrical as The Door is, Eick's philosophy of collective energy and interaction ensures maximum freedom all around. Drummer Audun Kleive may drive the early part of "Stavanger" with a strong backbeat, but it's still a free-wheeling exchange featuring the often reticent Balke's most extroverted playing in years, before Eick enters with a simple, singable melody that temporarily pulls back the dynamic, before leading to another climax built around the power of space and potency of nuance.

With his warm tone, selfless allegiance to the collective, and personal nexus of lyrical form and freedom, Eick is the most important trumpeter to emerge from the Scandinavian scene since Henriksen and Molvær. Dogmatic in conception, The Door is all human in nature, delivering mightily on the promise of Eick's earlier ECM appearances.